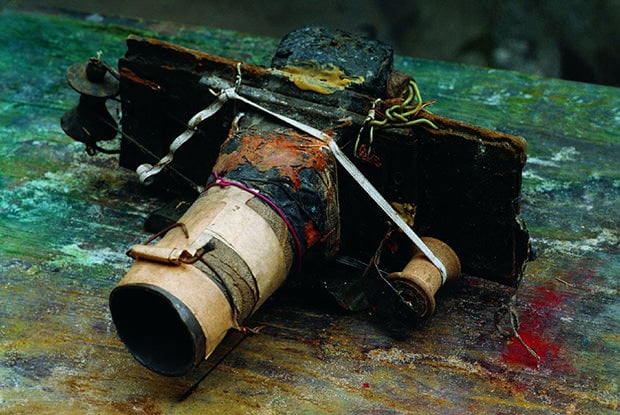 This might look like a pile of garbage, but it’s actually one of the homemade camera used by photographer Miroslav Tichý from the 1960s until 1985. He made his camera bodies from things he had on hand, including plywood, road asphalt, and thread spools. His lenses would be created from toilet paper tubes with custom lenses created from Plexiglas that had been sanded with sandpaper and then polished with toothpaste and cigarette ashes. For his enlarger, he used sheets of metal, two fence slats, a light bulb, and a tin can. Tichý used his equipment to take thousands of stalker-ish pictures of strangers (mostly women) in the Czech Republic. You can find some of his work here.

Tape Transfer Portraits Show Subjects Behind Their Own Altered Photos

John Cleese on How to Be Creative