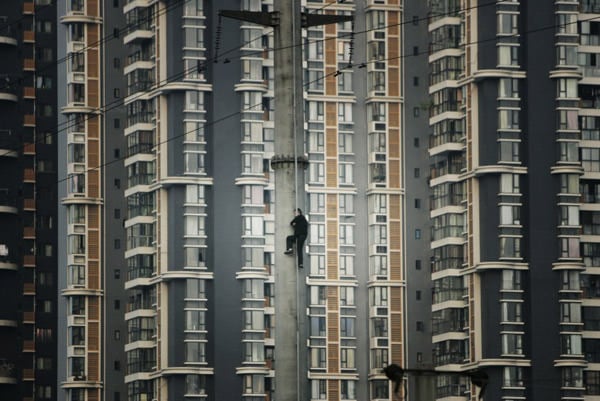 Shaofeng Xu’s photo of a protestor climbing a high-voltage electricity tower won Honorable Mention in the Contemporary Issues category of the World Press Photo 2012 contest. Look at it again as a thumbnail. 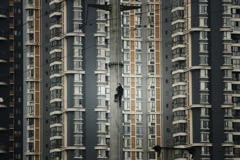 If the subject of the image seems to be “popping,” that’s because it is.

It is common to see heavy vignetting in a magazine portrait (think Platon). It is common for iPhone apps to add artistic vignetting. But in a photojournalistic image, this is very extreme. There’s no modern lens that creates that amount of light fall-off so close to the center of the frame (the technical information says 200mm at f/2.8).

For the past few years, I’ve been paying attention to the winners of the most prestigious photojournalism awards. The decisive moments captured by photographers (many in harm’s way) are pretty astounding. These are great images. But something that’s been bothering me is the obviousness of the post processing, and how “artistic” looking photos have become.

Photojournalism is held to a different standard of veracity than other forms of photography. Many organizations have created language to address what is acceptable, but in many cases it’s ambiguous at best with no clear line of delineation (and people get fired over this stuff). Here are some excerpts from various organizations:

Editing should maintain the integrity of the photographic images’ content and context. Do not manipulate images or add or alter sound in any way that can mislead viewers or misrepresent subjects.

The content of the image must not be altered. Only retouching which conforms to currently accepted standards in the industry is allowed. The jury is the ultimate arbiter of these standards and may at its discretion request the original, unretouched file as recorded by the camera or an untoned scan of the negative or slide.

Pictures of the Year International Entry Rules: No specific language regarding manipulation.

Given the number of cases of manipulation (and the ambiguity surrounding what’s acceptable), I propose that photojournalism contests require entrants to submit their original, unadulterated files with their entries, so that judges can see the level of retouching involved. This doesn’t solve the question of where the line is, but it does give the judges an informed position from which to ask that question.

But who am I? I asked a few photographers and judges about it.

The selective dodging and burning has gotten way out of hand and the saturation to the point of ‘neon,’ in picture two is insane! I would have disqualified all of these…or…at the very least….if the judges felt compelled to keep them, award them with an HM AND a Citation that read….’If this image was not Photoshopped to death, it may have been considered for an award.’

What I think they could do, is that during the judging process, if there is any question about post production, that they ask the entrant to submit the original file for comparison. But even that is no guarantee that judges will miss/ignore these egregious abuses…..or….before they make the awards public….they could request the originals from ALL the winners for comparison.

As a profession and an industry, we go through this ‘manipulation’ in cycles. In the 1950′s and 1960′s it was potassium ferricynide that was used to bleach the eyes and bring highlights of ‘extraordinary’ glow to skin. In that era the phrase or excuse was that it made the tones more reproducible. By the 1970′s through the 1990′s, it was called ‘hand-of-god’ burning and dodging. No, matter what we called it, the result was heavily manipulated images. When these images win in contest, we (as a profession) reduce the integrity of our work. We also ‘encourage’ other to do the same thing to ‘win’ a contest.

When work is disqualified. When awards are taken away. When judges start rebuking the obvious manipulation found in world-wide contest, perhaps we can get back to visual journalism and judgement of content. One of the current ‘trends’ we fight at the university is the students desire to convert everything contest image to overly dramatic black & white images, because it ‘wins’ awards. This make it look like the 1960′s is another form of manipulation.

I feel people easily dehumanize the subject or dehumanize photogoraphers themselves to make it more shocking or dramatic by adding photoshop. it’s all about contest, not to tell the story inside the pictures anymore.we are becoming more and more a real ‘exploiter’ of people in the photographs for the sake of ‘WINNING’ contest, recognition or to get famous. sad.

anyways, my answer is yes , if they have Raw file shot with digitally, then they probably should send the original images.

I think that judges should be able to ask for the originals. There have been too many times in the last few years that work has been called into question. Some of that should have been addressed as well as photographers that did honest work as well. It keep the whole process honest.

Here’s the thing. The winning photos are very strong without any Photoshopping. So what is the value of the manipulation? Are judges being seduced by these toned images such that a “flat” image is unconsciously doomed? If so, then I believe the onus is more on the judges than on the photographers. But photojournalists should also be having the same dialog amongst themselves. After all, if you don’t want to be policed, then police yourself.

And we should revisit this every two years to make sure its up-to-date, and hopefully gain acceptance from all the major photojournalism contests.

About the author: Allen Murabayashi is the CEO and Co-founder of PhotoShelter. Allen authors PhotoShelter’s free business guides for photographers and marketing professionals, including topics like email marketing, search engine optimization, and starting a photography business. Allen is a graduate of Yale University, and flosses daily. This article originally appeared here.