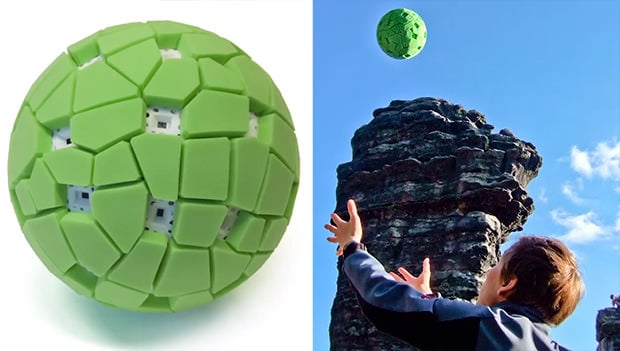 The ‘Throwable Panoramic Ball Camera‘ is an awesome new camera developed by a group of computer science researchers led by Jonas Pfeil.

The camera is thrown into the air and captures an image at the highest point of flight – when it is hardly moving. The camera takes full spherical panoramas, requires no preparation and images are taken instantaneously. It can capture scenes with many moving objects without producing ghosting artifacts and creates unique images.

It uses 36 separate 2-megapixel mobile phone camera modules, which are mounted in an enclosure that’s padded with foam. Photographs can then be downloaded to a computer via USB and viewed in a spherical panoramic viewer.

Here’s a video demonstration of the camera in action:

The quality of the cameras obviously isn’t the best at this point, but the concept is pretty awesome. In the future we might be snapping 360-degree panoramas in high-resolution using a tiny pocket-sized ball camera!