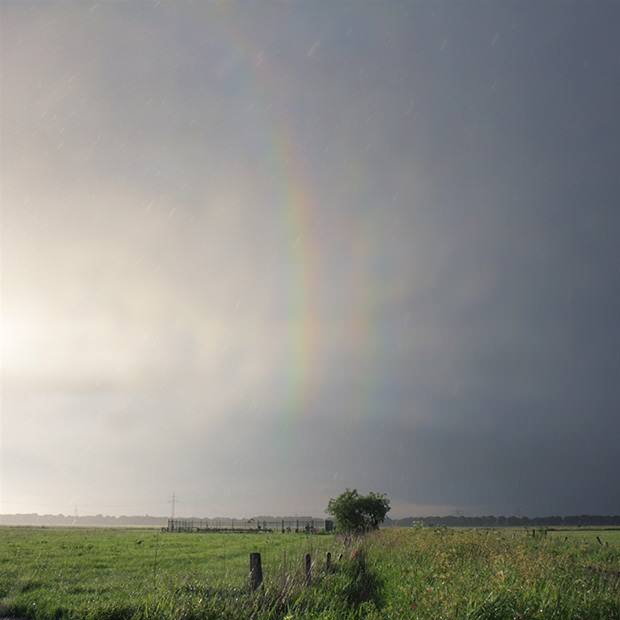 Seeing a double rainbow is a relatively rare treat, but how about three or four rainbows? Scientists have only reported seeing triple rainbows five times over the past 250 years, but German photographer Michael Theusner was recently able to capture this first ever photograph of a fourth-order rainbow. Ordinary rainbows (first and second order) appear in the area of the sky opposite the sun (and aren’t seen in his shot), but when higher order rainbows appear, they show up on the sunward side.

Last year, U.S. Naval Academy meteorologist Raymond Lee and a colleague, Philip Laven, laid out a prediction for the conditions that would produce third-order rainbows, and they challenged rainbow-chasers to go out and find one. Among the requirements: dark thunderclouds, and either a heavy downpour or a rainstorm with nearly uniform rain droplets. If the sun broke through the clouds under these conditions, it could project a dim tertiary rainbow against the dark clouds nearby, they said. [#]

Back in May, a photographer named Michael Grossman followed this advice and succeeded in capturing the first ever photo of a third-order rainbow. Lee’s challenge and Grossman’s success are what inspired Theusner to try his hand at photographing higher order rainbows. You can find more background info on Theusner’s blog and in his recently published scientific paper.

P.S. Capturing all four rainbows in one shot is exceedingly difficult and hasn’t been done yet. Now there’s a challenge for those of you looking for a difficult photo assignment.