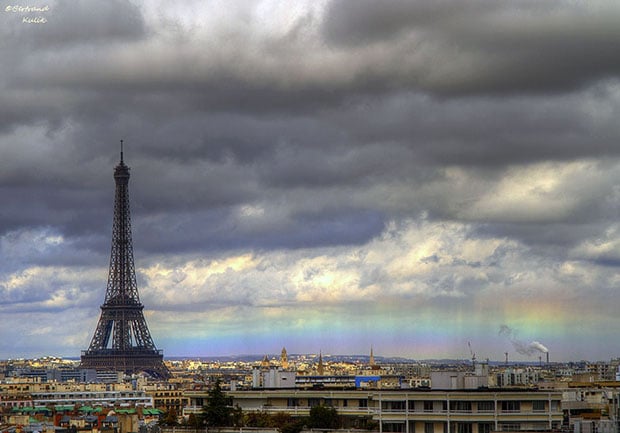 Photographer Bertrand Kulik was standing at his window in Paris last week when he noticed something peculiar about the horizon. Although his view is ordinarily quite beautiful because of the Eiffel Tower dominating the cityscape, this time it had something he was treated with a bright and colorful horizon rainbow painted across the sky in the distance.


The 32-year-old picked up his camera and managed to snap off the above photograph before the rainbow was gone (it lasted only a few minutes).

NASA’s APOD writes that while it’s an ordinary rainbow created in the same way as all the other rainbows you see around the world, this one’s rare appearance was due to the fact that the sun was unusually high in the sky.

It’s not actually a purely horizontal rainbow, but a gigantic rainbow for which only the top can be seen in the distant rain. Also, since the appearance of rainbows is unique to every observer, no one else in Paris saw this exact sight during those brief moments.

Some news publications around the web (e.g. The Daily Mail, The Mirror) are calling the sight a “fire rainbow,” but that appears to be a misidentification. Fire rainbows, or circumhorizontal arcS, are actually horizontal ice halos of the sun formed in high-level clouds.

Here’s an example of one by photographer Gavin Anderson: 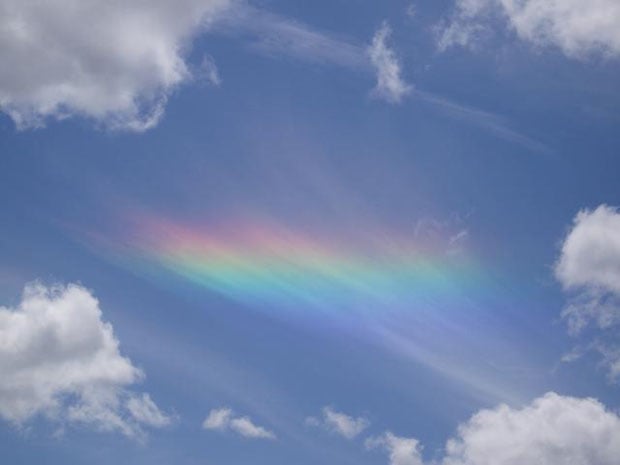 You can find a larger version of the Parisian horizon rainbow over on Kulik’s Facebook page. Kulik tells us that it can also be licensed through Barcroft Media.

Image credit: Photograph by Bertrand Kulik and used with permission