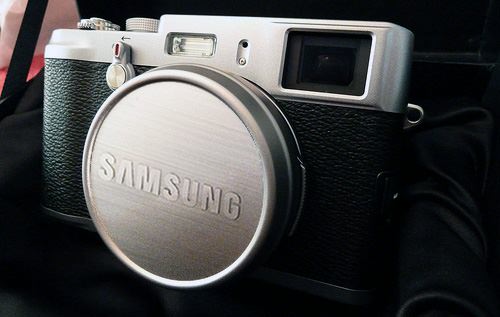 With the success of the Fujifilm X100, camera companies are starting to realize that consumers love both the design of old school cameras and the ease of shooting digital. Samsung may be looking to join the retro party — the latest rumor to hit the Internet is that Samsung is planning a X100-style camera called the R1… with interchangeable lenses!

Earlier today, the blog 36exp published a post titled The Samsung Retro R1: DSLR Spec in Compact Body. Just hours later, the post was quietly deleted, but not before Mirrorless Rumors snagged a copy of the text:

Last night I attended a feedback session run by a research company on behalf of a major camera company. They were looking for ‘advanced camera users’ to give feedback on a new camera design.

The spec of the camera that we were asked to give feedback on was given as:

They didn’t reveal it as Samsung initially, but the discussion got onto which brands we trusted and everyone mentioned Nikon, Canon, Leica etc as brands with heritage that they would trust if buying into what seemed to be a premium camera. When someone mentioned that they would be less likely to buy it if it was from Samsung a guy appeared (who been observing the session from behind one way glass) and announced that it was a Samsung camera, and asked our thoughts on this….

Couldn’t get any pictures or bring anything out unfortunately. It may be called the Retro R1 or similar as the mock up had Retro etched on it, but tape over the rest of the name.

I really liked it, seemed to have SLR spec in a smaller body, hopefully it comes to fruition.

One thing X100 fans have been clamoring for since the release of that camera — and subsequently the X10 — is a X100-style camera with interchangeable lenses (both the X100 and X10 have fixed lenses). Could Samsung actually beat Fujifilm to the punch and release a retro-styled interchangeable-lens mirrorless camera first? That would be crazy.

Update: The photo of Samsung prototype cameras that we shared a while back includes a retro inter-changeable lens one. Could that be the R1?

Time-Lapse Video of a Stop-Motion Video Being Made