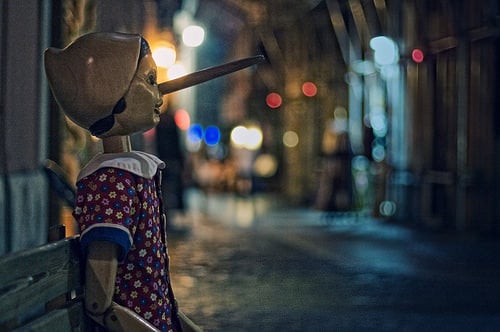 The debate regarding what makes a photograph “truthful” or not is probably as old as the art of photography itself. By sheer coincidence, there were a couple interesting articles published today on this issue, and written from two different points-of-view.

Mark Schacter over at Luminous Landscape wrote up a piece titled “Am I a Photographic Cheat?” in which he argues from an artistic perspective,

The dishonesty/deception argument assumes that the untouched image is a faithful copy of reality. But we know this isn’t so. Even the best digital sensors don’t have the capacity to render shadow and highlight detail in the same scene the way the human eye does. And lenses introduce pincushion distortion, barrel distortion, chromatic aberration, and the like. The irony is that if the goal is to produce a faithful copy of reality, the image must be manipulated!

As for “breaking-the-rules,” where is it written that the landscape photographer’s role is to produce a carbon-copy of reality? Who says we shouldn’t manipulate an image to make it as powerful as possible? And, by the way, what would the no-manipulation “rule” mean for black and white photography which, after all, presents a radically altered image of the real world?

Benjamin Secher at The Telegraph offers a photojournalistic point of view in his piece on the work of Martin Parr, titled “The foibles of the world“:

‘Most of the photographs in your paper, unless they are hard news, are lies,” says Martin Parr. “Fashion pictures show people looking glamorous. Travel pictures show a place looking at its best, nothing to do with the reality. In the cookery pages, the food always looks amazing, right? Most of the pictures we consume are propaganda.”

[There is an] appalled expression on Parr’s face when I suggest that sometimes, regardless of their truthfulness, pictures of things looking their best might be exactly what people want to see. “Of course,” he says, “but what people want…” He hits that last word with the force of a punch, then lapses into silence, as if the very thought of taking a photograph that perpetuates a fantasy disgusts him beyond words.

“If you go to the supermarket and buy a package of food and look at the photo on the front, the food never looks like that inside, does it? That is a fundamental lie we are sold every day. Part of the role of photography is to exaggerate, and that is an aspect that I have to puncture. I do that by showing the world as I really find it.”

It’s a question that can never be answered once and for all, simply because there’s so many different forms of photography and goals that photographers pursue. Even when considering a single genre of photography, such as photojournalism, the line between truthfulness and deception is anything but clear — just look at the debate caused by the AP’s policy on red-eye removal!

Image credit: Pinocchio by The Wolf

Footage Captured at One Trillion Frames per Second