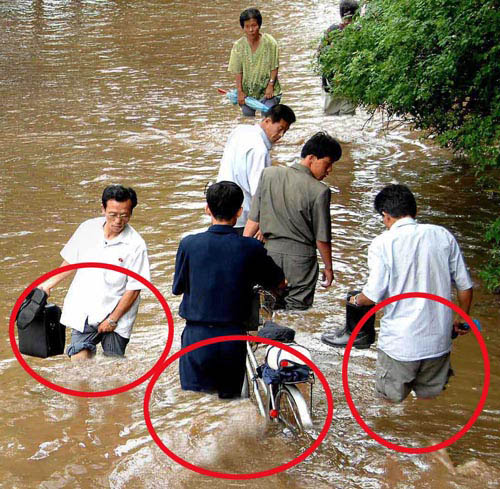 The North Korean government is the latest to get caught trying to feed a poorly Photoshopped photo to the media. This past weekend the Korean Central News Agency — a state-run organization — released a photo of citizens trying to wade through floodwaters in Pyongyang, saying that heavy rains flooded farmlands, destroyed homes, and caused deaths. After initially passing the image onto its members, the AP decided to issue a “kill notice” (yup, that’s what it’s called) a day later to withdraw the photo, stating,

The content of this image has been digitally altered and does not accurately reflect the scene […] No other version of the photo is available.

The problem was the fact that the clothing worn by the people in the photo don’t appear to be wet at all — even where the water meets the pants! It appears the water level was much lower, and the government tried to exaggerate the image, perhaps in an attempt to appeal for international aid.