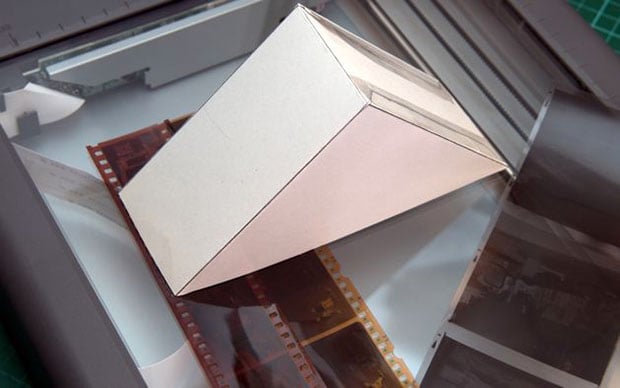 If you’ve tried to scan film using an ordinary flatbed scanner as you would a piece of paper, you’ve probably discovered that it didn’t turn out very well. The reason is because film needs to be illuminated from behind, while conventional scanners capture light that’s reflected off what they’re scanning. Before you give up hope and shell out money for a film scanner, here’s some good news: you can build a cheap and simple cardboard adapter that turns any scanner into a film scanner!


Andrew Lewis over at Craftzine came up with a triangular wedge cardboard adapter that helps reflect light from above the film. Simply download the template, print it out on silver card stock, and fold it into its proper shape.

Once your film is scanned, invert it in your favorite image editing program, then some color correction and dust removal should give you a nice result:

This’ll work for negative film and color slide film. Color print film might be tricky to do properly. Head on over to the full tutorial to get started!

How-To: Turn Slides and Negatives Into Digital Photos (via Make)