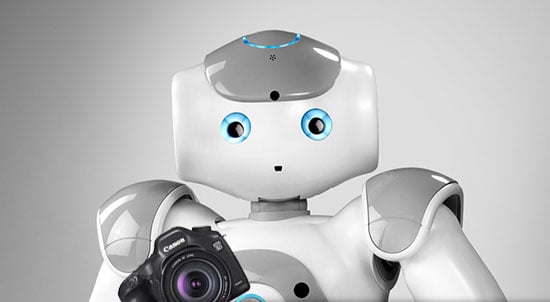 Robots might not be able to convey emotions or tell stories through photographs, but one thing they’re theoretically better than humans at is calculating proportions in a scene, and that’s exactly what one robot at India’s IIT Hydrabad has been taught to do. Computer scientist Raghudeep Gadde programmed a humanoid robot with a head-mounted camera to perfectly obey the rule of thirds and the golden ratio. New Scientist writes,

The robot is also programmed to assess the quality of its photos by rating focus, lighting and colour. The researchers taught it what makes a great photo by analysing the top and bottom 10 per cent of 60,000 images from a website hosting a photography contest, as rated by humans.

Armed with this knowledge, the robot can take photos when told to, then determine their quality. If the image scores below a certain quality threshold, the robot automatically makes another attempt. It improves on the first shot by working out the photo’s deviation from the guidelines and making the appropriate correction to its camera’s orientation.

It’s definitely a step up from Lewis, a wedding photography robot built in the early 2000s that was taught to recognize faces.

(via New Scientist via DVICE)

Street Photography as Seen through the Viewfinder of a Leica M9