Robot dogs are being trained to carry out Google Maps-style 360 virtual walkthrough tours in construction sites.

Boston Dynamics, a company famed for its elaborate human-like robots, has teamed up with Insta360 to create a unique photographer.

Virtual tours are walkthroughs of a location that can be viewed from any device, much like Google Street View. They have become increasingly popular in recent years with many businesses employing them as a vital part of marketing strategy.

However, while a virtual tour of a museum, for example, may only need updating once a year or once every few months, a construction site is constantly changing and needs to be closely monitored.

This is where Boston Dynamics’ Spot the robot dog Dog comes in useful. Spot excels in maneuvering unpredictable and difficult terrain and can be programmed to automatically walk a specified route, even somewhere messy like a building site. 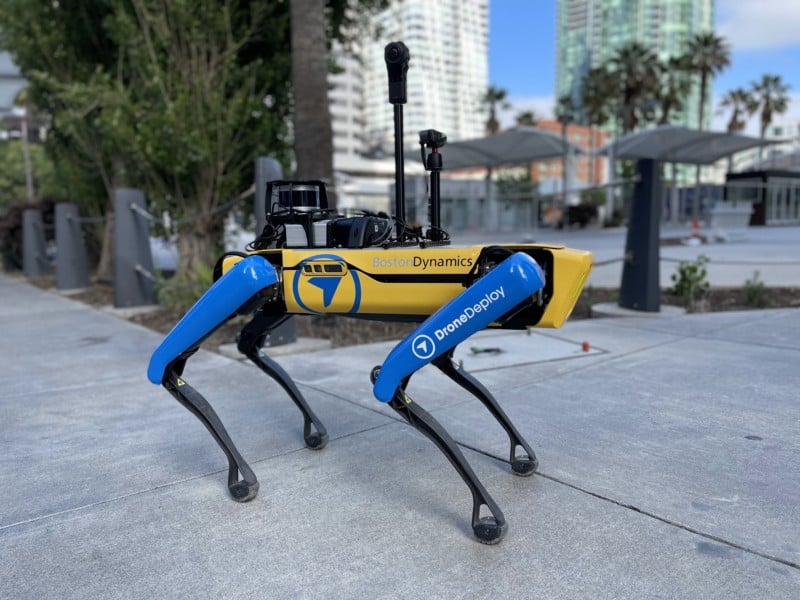 Spot can walk on uneven surfaces and climb down stairs. The robot dog can be trained to scan the exact same location every time, unlike error-prone humans who won’t be consistent with their shooting positions.

360 virtual walkthrough tours need a 360-degree camera. Insta360 is a camera company dedicated to that market and in this case, Spot is using the Insta360 RS 1-Inch 360 edition.

“To capture a 360 virtual walkthrough of a constantly changing job site, you need a camera that can deliver clean, stabilized, and crisp footage in tough conditions,” says Insta360 on its blog.

“360 cameras can be limited if they’re low resolution, lack good stabilization or have smaller sensors resulting in overexposed images.”

The RS 1-inch is fully integrated with DroneDeploy, which enables the user to pre-plan an inspection route through a job site. The operator can connect the camera to DroneDepoloy via Wi-Fi which will give a live 360 view, as well as plan the route that Spot will take.

Workers can then identify any issues as seen by Spot and make notes for colleagues to read and fix.

“With a simple link, stakeholders can view progress on a construction project from anywhere in the world and see daily progress,” adds Insta 360.

“Both owners and general contractors benefit from the increased trust and transparency of the visual system.”