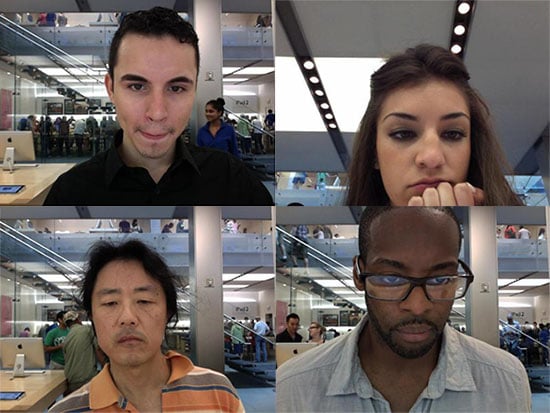 Yesterday we shared a disconcerting art project by Kyle McDonald in which he installed apps in Apple Stores throughout NYC to secretly photograph customers staring into the computers. We predicted that Apple wouldn’t be too happy about it and, lo and behold, it’s pissed. The company has reportedly enlisted the help of the US Secret Service to investigate McDonald’s actions. Mashable writes,

[…] four Secret Service men in suits woke him up on Thursday morning with a search warrant for computer fraud. They confiscated two computers, an iPod and two flash drives, and told McDonald that Apple would contact him separately.

McDonald, who has a master’s degree in electronic arts, admits the project might make some people uncomfortable. Before he began, he got permission from Apple’s security guards to take photos in the store, then asked customers if he could take their photos (with a camera). Had they all said no, he says, he wouldn’t have proceeded.

It’ll be interesting to see how this case turns out, but it appears to be another example of a common sense fail when it comes to photography.