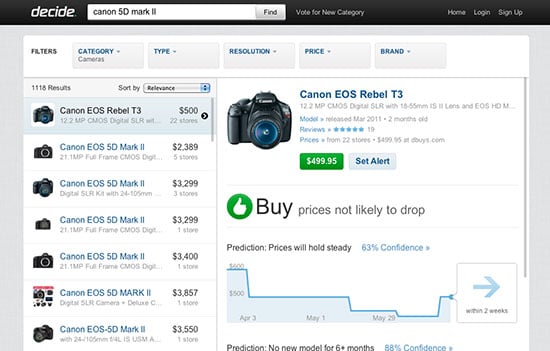 Last week we featured Shopobot, a new website that can show you the price history of camera gear and tell you whether it’s stable or not. Decide is a new service (just launched yesterday) that goes a step further — it not only tells you whether to buy or not based on price stability, but checks to see whether there’s a newer model available or likely to be announced in the near future. The service bases each decision on 40 price factors, historical trends, and relevant rumors regarding upcoming announcements. With a new camera being announced every 45 hours on average, Decide might just help you avoid the pain of buyers remorse.

Update: A reader reports that the retailer AJRichard (which reportedly does bait and switch scams) is listed on Decide. Be smart when choosing where to purchase from! (Thanks Ryan!)

29 Things You Can Do to Stay Creative