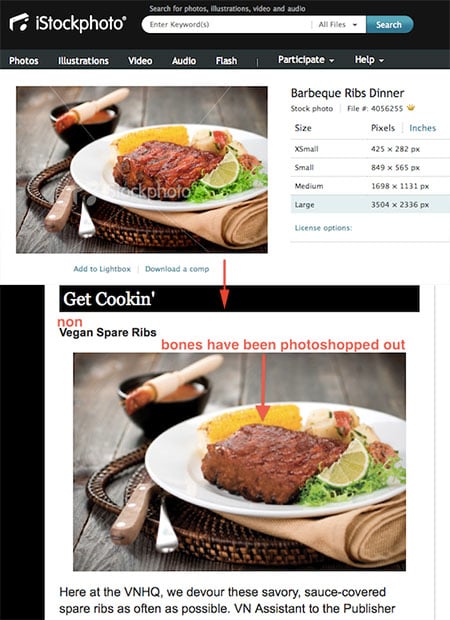 In the past week or two there has been an interesting controversy regarding the use of stock photography: vegan blogger quarrygirl.com published a post on April 13th accusing the nations leading vegan magazine VegNews of using non-vegan stock photos to illustrate its vegan recipes. An example presented is a “Vegan Spare Ribs” article that uses a Photoshopped iStockPhoto image of actual barbecue spare ribs (shown above).

We’ve always been fans of VegNews, since back in the mid-2000s when we’d wait with bated breath for the US Mail to deliver our copy. We’d eagerly flip through, reading all about the latest veg stuff, salivating over the amazing pictures, trying out a vegan recipe, and maybe even discovering a restaurant in our home town through one of their reviews.

it’s sad, then, that the pictures we’ve been drooling over for years are actually of MEAT!

After the story went viral and appeared in publications ranging from CNN to the New York Times, the magazine issued a letter explaining the reasons behind the meat photos:

Yes, from time to time, after exhausting all options, we have resorted to using stock photography that may or may not be vegan. In an ideal world we would use custom-shot photography for every spread, but it is simply not financially feasible for VegNews at this time. In those rare times that we use an image that isn’t vegan, our entire (vegan) staff weighs in on whether or not it’s appropriate. It is industry standard to use stock photography in magazines—and, sadly, there are very few specifically vegan images offered by stock companies. In addition, it’s exceedingly challenging to find non-stock imagery that meets the standard necessary for publication. We would love nothing more than to use only vegan photography shot by vegan photographers, and we hope to be there soon. [#]

What are your thoughts on VegNews’ use of stock photography?

RANT: VegNews is putting the MEAT into vegan issues (via A Photo Editor)