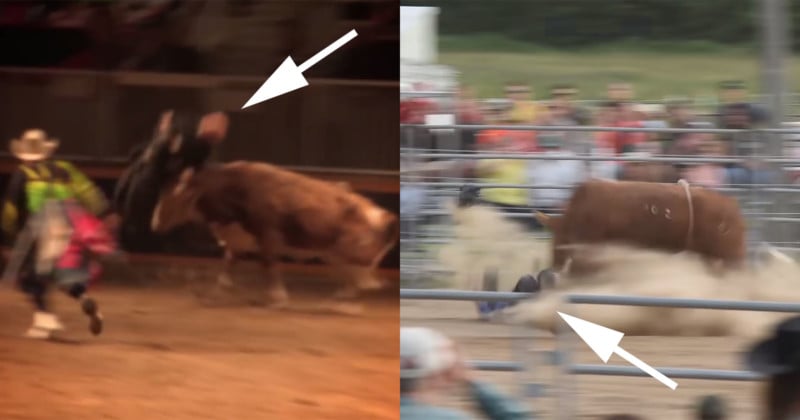 Norm Betts is one tough photographer. The photojournalist has spent over a decade shooting rodeos inside the arena during actual competition, and he has had at least two bone-shattering encounters with charging bulls. Both hits were caught on camera.

CBC News reports that his latest brush with death occurred earlier this month at the Kitchener-Woolwich Ultimate Rodeo Tour. During a split second in which Betts wasn’t watching the bull, the animal charged and rammed Betts at full speed, sending Betts and his DSLR kit flying across the arena.

The incident was captured at around 30 seconds in this video:

After knocking Betts onto the dirt, the bull returns and gives him a flip, causing another loud gasp from the crowd (and his wife, who was watching from a short distance away).

“The golden rule is ‘never take your eye off the bull’,” Betts tells CBC K-W. “I thought [the bull] had cleared and I was looking down at my cameras and that’s the last I remember.”

Betts emerged relatively unscathed: he suffered a cracked sternum and several broken ribs — it could have been much worse.

The photographer had another crazy encounter with a rodeo bull back in 2013 at the Royal Winter Fair. In that case, he got tossed nearly 10 feet into the air. It was captured at 15 seconds in this video:

In that incident, Betts suffered a broken rib from landing on his DSLR camera on the way down.

Despite his rough experiences, Betts isn’t planning on quitting this type of rodeo photography anytime soon. He’s planning on getting back into the arena as soon as he’s healed.

P.S. You can find some of his rodeo photos on his website.

4 Ways to Add Color to Shadows Using Gels for Portraits