After Noah Kalina published his “Everyday” video back in 2006 featuring a self-portrait a taken every day for 2,356 days, the concept took off and soon the Internet was filled with copycat projects by people who wanted to document their own lives in the same way. If you’ve been wanting to try you hand at taking a photo of your face every day but have lacked the discipline to do so, there’s a new app for the iPhone called “Everyday” that is designed to make things easier for you.

The app can remind you once a day to take a photo, and allows you to either frame your face using a grid or as an overlay over the previous day’s photograph. Once you have a number of photographs captured by the app, it can help you stitch them together into a sweet timelapse video of your face. 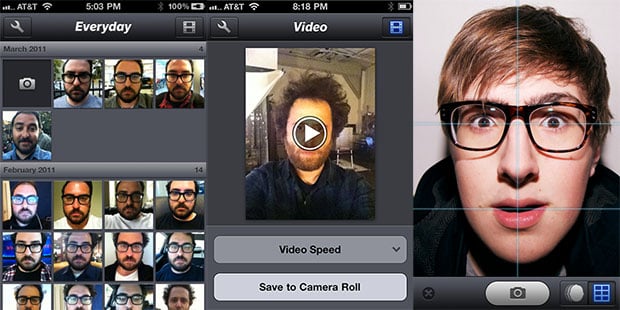 Noah Kalina is actually one of the four guys behind the project (he’s the “ghost” in the intro video above). Here’s his original video that started this craze:

You can buy the app for $2 over in the Apple App Store.