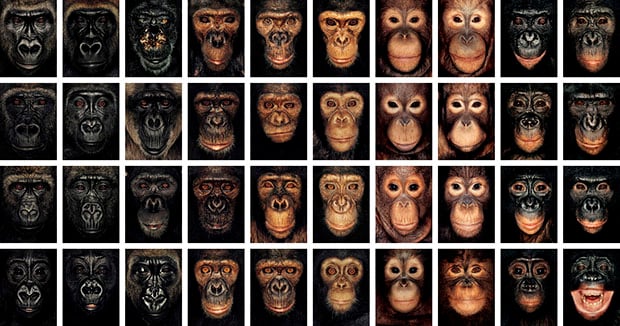 While watching a nature program on primates I was struck by their facial similarity to our own. Humans are clearly different to animals, but the great apes inhabit that grey area between man and animal. I thought it would be interesting to try to photograph gorillas, chimpanzees, bonobos and orangutans using the aesthetic of the passport photograph- its ubiquitous style inferring the idea of identity.

I decided against photographing in zoos or using ‘animal actors’ but traveled to Cameroon, Republic of Congo, Democratic Republic of Congo and Indonesia to meet orphans of the bush meat trade and live pet trade. [#]

Check out the “passport photos” up close on Mollison’s website.

James & Other Apes (via Photojojo)