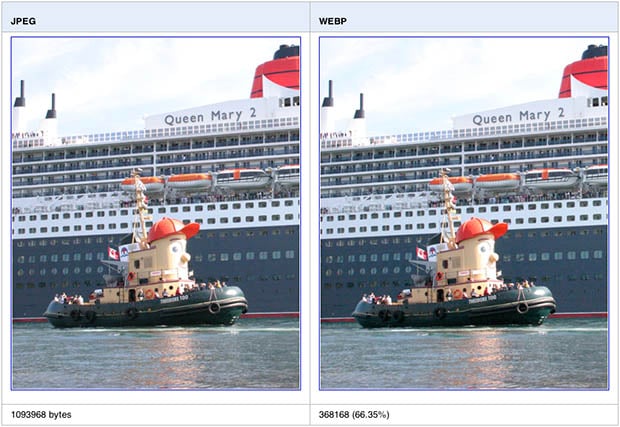 Google unveiled a new image format today called WebP that it hopes will make the web faster by cutting files sizes of images without affecting quality. According to a blog post they published earlier today, photos and images account for 65% of the bytes transmitted by websites. In their tests done using 1 million randomly selected images from the web, re-encoding images as WebP resulted in an average file size reduction of 39%. Here’s a gallery with image and file size comparisons.

Like JPEG, WebP is lossy, so file size can be exchanged for image quality. It also means the benefits of the new format would be more for things like photographs rather than simple images that are more efficiently encoded as a GIF or PNG (e.g. logos, icons, etc..).

However, it’s unlikely that JPEG will die anytime soon given how ubiquitous it is on the web. Even the committee behind the JPEG tried and failed to replace it (see JPEG 2000). Rather than benefiting the web as a whole, it seems more likely that this technology will mainly benefit Google in the short term. As more and more people adopt Chrome as their browser of choice, Google can see significant savings in bandwidth and load times by checking for browser compatibility and then serving WebP images instead of JPEGs whenever appropriate. The company is planning to include support for WebP in an upcoming release of Chrome.

WebP, a new image format for the Web (via CNET)

P.S. Facebook could probably benefit greatly from this as well, given the massive spike in bandwidth usage they’ll see after increasing their max image size by eight fold.

Thanks for the tip Eugene!