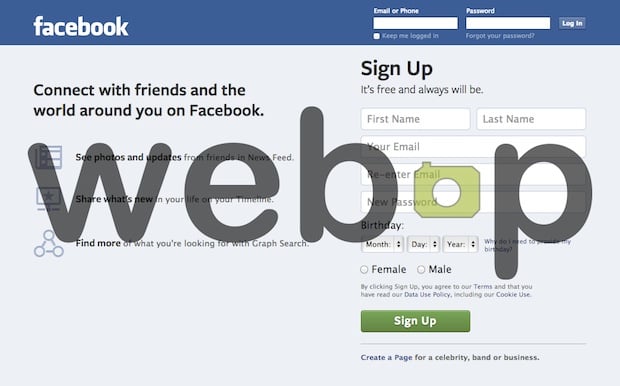 In an attempt to speed up its sizable network and lower costs, Facebook recently decided to begin using Google’s WebP image format. The format was designed by Google as a space-saving alternative for PNGs and JPEGs. WebP provides lossless and lossy compression, support for an alpha channel, support for animation and more — all at much smaller sizes and almost identical image quality.

But all of these advantages come at a price, support for the WebP image format outside of your browser is far from universal. Google set it up as a Web format that, for now, is not supported by any of the major operating systems natively. And so, after the switch, when Facebook users tried to download a funny photo or the vacation pics their friends decided to share through Facebook, they wound up with un-viewable WebP files.

Much as this is a big win for the file format itself — nothing says “you’ve arrived” like Facebook picking you up — making the switch unannounced and upsetting its user base may not have been the best move on Facebook’s part. Still, if WebP isn’t your thing, there are a few options open to you.

Downloading that image will yield a file that can only be handled by the Web browsers Chrome or Opera, and a handful of software programs/plugins. If you want to work around that and get your hands on the original JPEG, you’ll have to either find the same photo using Firefox, Safari, or IE; or, alternatively, Opera users can have their browser emulate IE.

If, however, you want to work with or convert the original WebP file format, compatible software includes: Picasa, Pixelmator, ImageMagick, Konvertor, ReaConverter, XnView, and IrfanView. There is also a Google Codec that extends compatibility to Windows applications that use Windows Imaging Component, and free plugins are available for both Photoshop and GIMP.

The WebP file format is always evolving, and as more big companies begin to implement it, its limitations will inevitably have to be worked out. Hopefully that translates into universal support sometime soon. But until then, if you need to download or work with images off of Facebook, you’ll have to stick to the options presented above.

Correction: We originally reported that WebP files were only supported by the Chrome and Opera browsers. As several of you have pointed out, however, we left out several software-based options that are available for those who would like to work with the format instead of avoiding it.

Those include Picasa, Pixelmator, ImageMagick, Konvertor, ReaConverter, XnView, and IrfanView. Free plugins that extend compatibility to both Photoshop and GIMP are also available, as is a Google Codec that extends compatibility to Windows applications that use Windows Imaging Component. The post has been changed to reflect this.