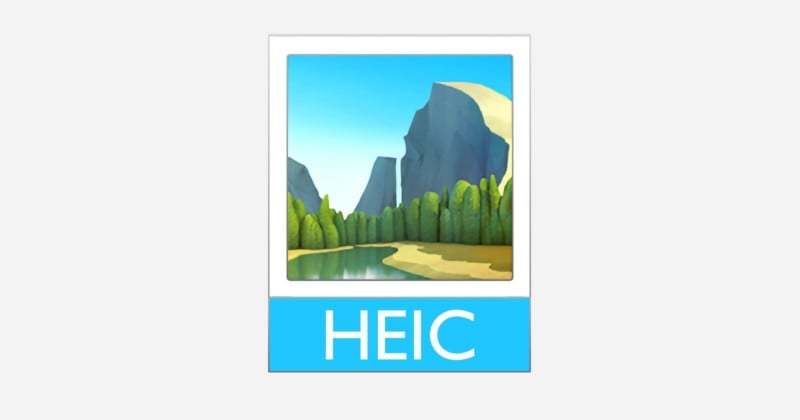 An HEIC is a type of image file that contains compressed data, along with metadata such as the location a photograph was taken, the date it was created, and more. While it does reduce picture information, it typically results in a better representation of the original source than an image saved in JPEG format.

What Does HEIC Stand For?

HEIC stands for High-Efficiency Image Coding and it holds images stored using a variant of HEIF, High-Efficiency Image Format. The efficiency of an image format references how much space is required to store a file with high quality and visual accuracy. Every HEIC file is an HEIF image, however, not every HEIF is an HEIC. Both offer much greater fidelity at the same file size as image formats, such as the older JPEG compression type that was critical for the early internet.

In many cases, HEIF is used as a replacement for JPEG images. Most notably, all new Apple products can open, edit, and save images compressed in HEIF as HEIC files. The iPhone saves photos as HEIC by default, however, there is an option to use JPEG. Many major digital imaging companies support HEIF and HEIC, including Canon, Sony, Qualcomm, and Samsung.

How Does HEIC Compress a Photo?

HEIC uses an image compression codec that was first developed for video. High-efficiency video coding (HEVC) compresses every frame of a video with discrete cosine and sine transforms (DCT and DST) with block sizes ranging from 4×4 pixels to 32×32 pixels. This greater range of compression techniques has a dramatic effect on the visual fidelity of the image, providing more detail where it’s most needed.

When used to compress video, HEVC also uses inter-frame compression since the scene often has very few changes in the fraction of a second between frames. This allows video to be compressed more than a photograph. Even so, HEVC is very effective at compressing pictures and is more efficient than most image formats.

How Much Space Does HEIC Save?

HEIC is twice as efficient as JPEG. That means it retains similar visual fidelity at various quality levels as JPEG while requiring half as much storage space. An image that’s saved as a 4-megabyte HEIC file will need 8 megabytes to look as good when using JPEG compression.

While 4 megabytes is an insignificant amount, across a library of thousands of photos, the savings can be measured in gigabytes. File transfers are faster with HEIC and uploads will be quicker even when using a cellular network.

Are There Any Downsides to Using HEIC?

For the most part, using HEIC is a good way to save space and speed up file transfers. It doesn’t degrade a picture as much as a file of the same size that uses JPEG format. It’s also a more versatile format that allows more varied types of metadata than JPEG.

Sharing and editing an HEIC file can sometimes require an extra conversion step since Windows and Linux do not recognize this format. As the default format for an iPhone, this can be annoying, however, iOS automatically converts an HEIC file to JPEG when sharing from an iPhone directly to an incompatible computer. The conflict comes when iPhone photos are transferred to an external drive or uploaded to cloud storage before being transferred to an incompatible system.

Another concern is making HEIC files available online. Few web browsers support HEIC files and even Apple’s Safari browser limits the use of an HEIC file, allowing this file type to be chosen as a background image for new tabs, but not loading it directly. Social media networks convert HEIC to another format, however, so this is only a concern if uploading directly to a server or private network that might not recognize the format.

It’s easy to convert HEIC to JPEG if need be and many popular photo editing apps can load an HEIC file for editing even if it can’t be previewed in the computer’s file manager. Both Windows and Linux have free extensions that make HEIC and HEIF files as accessible as a JPEG within the operating system.

Most devices that can capture photographs in HEIC or HEIF format include the option to save in the more common JPEG format. As mentioned above, JPEG offers better compatibility but at the cost of larger file sizes.

In most cases, it’s also possible to save a picture as a RAW photograph. RAW format is typically unprocessed and uncompressed, which offers the highest quality possible but much larger file sizes, requiring roughly five to ten times as much space as JPEG or HEIC to store.

An iPhone can capture a variation on RAW format called ProRAW. The iPhone’s camera app processes images saved as ProRAW with Apple’s AI-powered DeepFusion, Smart HDR, and Night mode features, providing all of the advantages of a standard photo while saving an uncompressed image that retains the best quality for editing.

When saving a photograph for sharing or archiving without a need for uncompressed quality, WebP is even more efficient than HEIC and has an option for lossless compression. WebP is recognized by most web browsers so it’s a good choice for websites and that’s why Google developed this format.

As with most image formats, there are several file extensions associated with HEIC and HEIF files. Apple uses .heic only, while Canon and Sony prefer .hif. Other file extensions include: .heif, .heifs; .heic, .heics; .avci, .avcs; .avif, .avifs.

Files with extensions that end with an ‘s’ indicate an image sequence, somewhat similar to animated GIF files. One might expect to see HEICS files when using AirDrop to send an iPhone Live Photo to a computer, however, Apple’s default setting is to send an HEIC file that contains only one picture, not the full animation.

There is an option to share All Photos Data, which results in a folder containing an HEIC file for the picture and an HEVC file for the video. HEIC and HEIF image sequences are used by apps but typically aren’t used for sharing and are rarely seen by the end-user.

Who Made HEIC and Why?

While Apple adopted the HEIC file type in 2017, HEIF and HEIC files already existed before that time with the standard being finalized by the Moving Pictures Expert Group in 2015. This collaborative effort also created the video format of the same name, MPEG.

HEVC is a closely related technique that is used to compress video and stands for high-efficiency video coding. As important as it is to reduce the file size of a photograph, storing a video is even more demanding since it generally consists of 30 to 60 frames for every second of video.

MPEG developers and members were greatly motivated to find a way to improve the accessibility of digital video and advance the industry by greatly lowering bandwidth requirements while retaining quality. In particular, keeping each frame at a higher fidelity facilitates easier video editing. HEVC achieves that with reduced file size and that’s why it was used in the very popular video codec, H.265. HEVC happens to be a very good image compression technique as well and is far superior to JPEG.

Why Does Apple Use HEIC?

HEIC files are one of the most efficient ways to store images while retaining good quality but that isn’t the only reason Apple implemented this format. HEIC can also include an alpha channel, allowing it to store images with transparency. A depth map makes it easy to include LiDAR scans and depth estimations with an image. This versatility makes HEIC a much more useful format to use as a standard throughout Apple’s ecosystem.

HEIC files have been around for many years and exploded in popularity when Apple made HEIC format the default for every iPhone in 2017. When using an Apple device, HEIC files are recognized and can be used with the same ease as the more pervasive JPEG format.

While HEIC files can cause a bit of trouble on Windows and Linux computers in certain circumstances, there are free image utilities that can convert HEIC to JPEG format. HEIC image converters are available online and as apps for macOS, Windows, and Linux-based systems.

iCloud, Google Photos, OneDrive, Adobe Creative Cloud, and Amazon Photos all support HEIC and HEIF images, making this a nice way to save on subscription costs. It might even be worthwhile to convert a JPEG library into HEIC or HEIF before uploading to the cloud to reduce the amount of storage used.

HEIC doesn’t solve every need and there is still plenty of room for improvement. WebP is usually even more efficient and RAW files provide the best quality possible. HEIC is, however, a very versatile and convenient format for Apple devices and is popular enough to be supported for the foreseeable future.