Here is a little video on how I did the photography with Canon Speedlites while dropping items into a tank of water.

With a white background, I used a Canon Speedlite 580ex II on the left and right of the fish tank with water. They were set to manual 1/128sec. 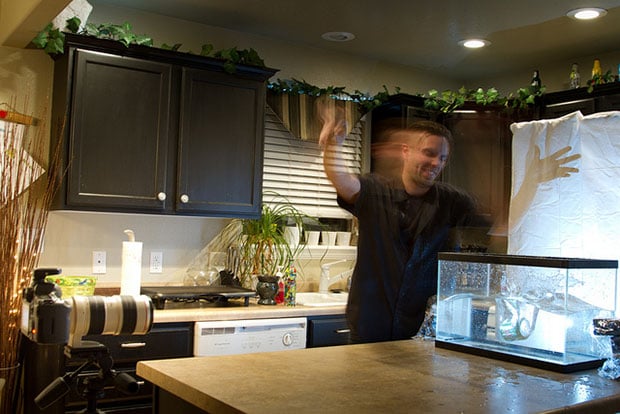 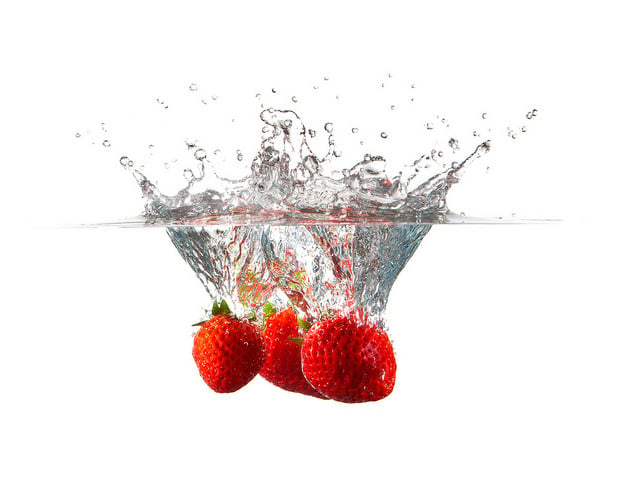 I only had to squeegee the tank splashes once every 10 or so drops when using white cause its really easy to remove the spots in Lightroom with the exposure brush. But on the black background, it was a totally different story. I had to squeegee every single time or the spots on the side of the tank would appear as bright as day in your photo, making it much harder to remove them in post. I bought a squeegee from WalMart for $1.50, and cut the handle off (since otherwise the handle would hit the end of the tank before I was done wiping it off).

With a black background, you don’t need to flash the backdrop. But I found that the top of the splash (above the waterline) was not bright enough in the photo, so I used the flash that used to be for the backdrop, and put it on a light stand pointing down into the tank to flash the water splashing up. Pretty much, in both cases (white and black), I used 4 flashes. You could really get away with less, but I had the flashes so why not use em. The only disadvantage of buying the cheaper flash triggers on eBay is that you lose ETTL functions from the camera. Using Canons built in wireless functions is great when you need to constantly change the flash ratios and exposures like in a portrait studio setup, but to keep ETTL while going with radio wireless triggers, you’ll have to spend $220 each for a PocketWizard or Radio Popper. The ones on eBay that don’t support TTL is just fine when you are running everything manual. 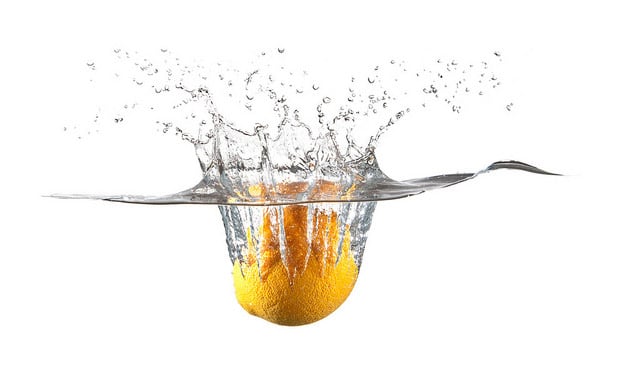 I had the camera tethered to Lightroom 3 (Beta 2) so I could see if the shot was perfect. I used the Lilliput 7″ HDMI monitor (you can buy these on eBay for a little more than $200) tethered to the 5D Mark II with an HDMI to Mini HDMI cable. The reason I have both a computer and a monitor is because it tends to take too long for the image to appear on the computer before I’m ready to take the next photo. Sometimes I’ll even shoot over and over without using the squeegee just to see if I get a good shot in those takes, the problem is when I do that, it takes a long time for the computer to catch up. With the LCD monitor, I can preview the shot to see if its acceptable or not, if it isn’t, immediately take another photo. If it looks good, then I check the computer (after the couple more seconds it takes to catch up) to see if the photo is perfect. Make sure the camera is set to manual focus, and focus it to the dead center of the tank (you’ll probably need 2 people to focus, one person to stick their hand in the middle of the tank, and the other person sets the focus. I had the 5D Mark II set to 100mm, f/10, ISO 125, 200/sec.

About the author: Clint Decker is a web developer by day and creative photographer by night. You can find him on Flickr as Louish Pixel.