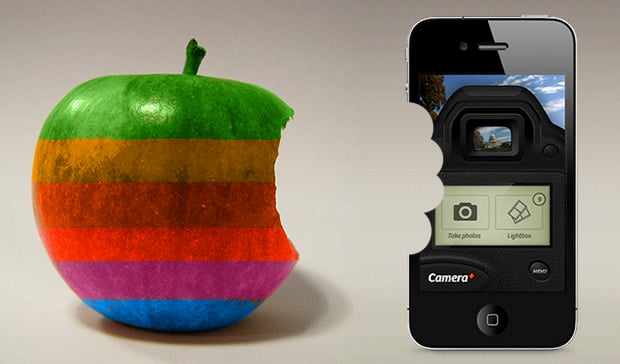 It looks like tap tap tap’s Camera+ added one too many features for Apple’s liking. When the app developers tweeted a secret workaround that enabled the volume button to double up to control the shutter, Apple pulled Camera+ from the App Store.

Just this week, developer John Casasanta wrote in a blog post that an upgraded version of the app originally intended to launch the feature, VolumeSnap. VolumeSnap would have also allowed users to use the volume control on iPhone headphones as a remote shutter control. Pretty nifty.

But Apple rejected tap tap tap’s new version, citing this as a reason:

So tap tap tap left out the feature — at first. The app retained the feature, which was now hidden, but could be enabled by pointing the phone’s browser to a specific site provided by the developers.

Though tap tap tap developers had only posted the tweet announcing the workaround for 30 minutes before taking it down, news of it had spread, and Camera+ suddenly rising into the #3 position for top paid apps. And then Apple came down in full force with its stringent hand of App Store regulation.

Currently, the App is nowhere to be seen on the App Store. In a touch of irony (or perhaps mere foreshadowing, for you literary types), tap tap tap’s John Casasanta had written of such possibilities in that same blog post as earlier:

Some of you pointed out other camera apps that make use of the volume buttons for snapping photos. But Apple suspects that these slipped through the review cracks because the developers intentionally hid the feature from their app descriptions and screenshots upon submission, but then added info about them after their apps got approved. When Apple finds out about these incidents, they tend to crack down pretty hard on them, sometimes going so far as completely banning the developers from the App Store. So this is definitely not the smart way to go.

And yet… why stir the wrath of Apple “standards”?

Camera+ was doing considerably well. The tap tap tap blog reports that within two months on the market, the $1.99 app netted half a million dollars. The app also enjoyed exposure as the App of the Week in the European App Store, and enjoyed a cozy spot amongst the most downloaded photography Apps.

The numbers show that while buyers largely enjoyed Camera+, even more were interested when the hidden feature came to light. The buyers have spoken: they want a shutter button.

The absence of Camera+ in the App Store is a testament to a very hot issue on Apple “censorship,” or at the very least its extremely closed market, but tap tap tap developers say they are optimistic in appealing to Apple for more open features:

What was suggested to us was that we file a feature request with Apple to provide a supported way to repurpose the volume controls. This is the official way for developers to suggest changes to Apple and we’ve done so many, many times in the past. Sometimes it’s taken over a year for a change to be made and sometimes things happen almost immediately. The great thing is that Apple’s constantly evolving the iOS SDK and almost everything we’ve ever needed has made its way into it. So we’re confident that it’ll happen… it’s just a matter of when.

But now the question is whether Camera+ will ever make it back on the market.

Update: Apple has turned the “volume up” button into a shutter in iOS 5.

Interview with Craig of Canon Rumors