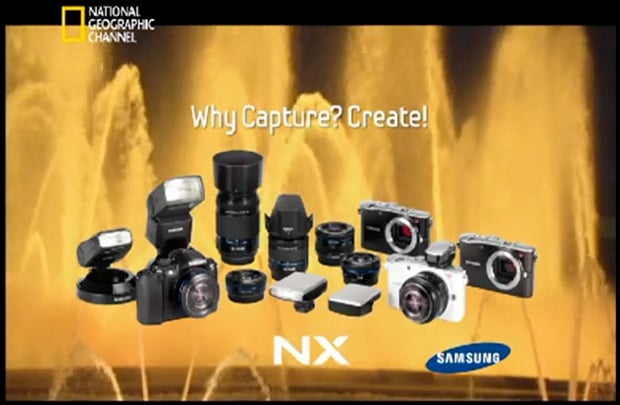 The mysterious white camera — most likely the NX100 — that was seen in a leaked photograph from a commercial shoot recently has apparently been spotted again, this time in a National Geographic/Samsung advertisement posted to YouTube.

At the end of the advertisement, there’s an NX gear lineup that shows the white camera and two other cameras that don’t currently exist in the lineup (the three mysterious cameras are on the right). Here’s a comparison of this recently leak and the previous camera spotted a couple weeks ago: They look identical, huh? Since the previous photo was taken at what was reportedly a commercial shoot for the NX100, we can conclude with a reasonable degree of certainty that this is indeed the upcoming NX camera.

What’s more, the YouTube video was yanked (made private) shortly after this news began circulating the Interwebs, further confirming our suspicions. It smells like a NX100 announcement is imminent.

Sea and Star Sparkles Captured Together in a Long Exposure Photo