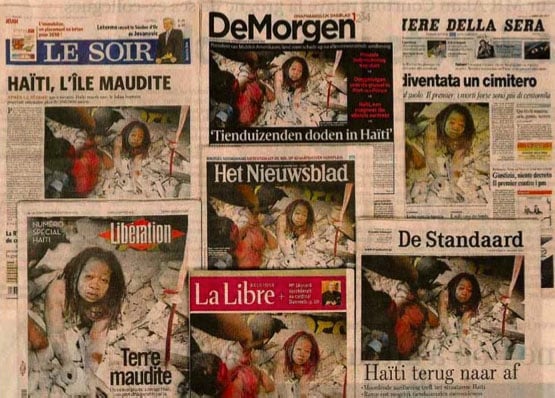 Photojournalist Daniel Morel shot an iconic image of a shocked woman looking out from the rubble moments after last January’s earthquake in Port au Prince, Haiti. Within an hour, Morel jumped on Twitter to share 13 high resolution images he had uploaded on Twitpic. By the next day, the photo of the woman was picked up by Agence France Presse (AFP) and Getty Images, was run on the cover of several publications and websites.

But Morel said he never authorized the news wires to distribute his images. In fact, several of his images were credited to another person, Lisandro Suero of the Dominican Republic, who reportedly has no photographic background. However, Suero tweeted Morel’s images without the photographer’s permission, and claimed copyright as his own:

And so began a legal storm.

Now Morel is being sued by AFP after he sent them cease and desist letters that the agency calls an “antagonistic assertion of rights.”

According to court documents, AFP claims that they did not infringe on Morel’s copyright and is suing Morel for “commercial disparagement,” as well as “demanding exorbitant payment.” AFP says that Twitter’s Terms of Service allowed for them to use, copy and distribute the image, and that Morel did not specify limits on how the photo should be credited.

Morel responded, saying that he was not familiar with Twitter’s TOS, and maintains that the images were stolen from his account without his permission, distributed and sold by the agency, which then “induced” other publications to violate Morel’s copyright. In a counterclaim to the agency’s complaint, Morel’s lawyer, Barbara Hoffman wrote:

To the extent that under the circumstances a specific intent in posting the images on Twitter can be attributed to Mr. Morel given the circumstances, … he posted his images online and advertised them on Twitter in the hopes that his images would span the globe to inform the world of the disaster, and that he would also receive compensation and credit as a professional photographer for breaking news of the earthquake before the news and wire services.

Some publications, including The Wall Street Journal, NBC, and the Associated Press contacted Morel to exchange compensation for his permission to publish. Others did not.

In order to enforce his copyright, Morel sent several cease and desist notices to several publications.

It seems that the case really boils down to the semantics of the Twitter TOS.

What might be worth noting is that the court documents from AFP frequently cite Twitter’s TOS, which mostly regards the text in Tweets, and does not extend to content linked to (otherwise, entire sites’ content might be considered royalty-free). Morel uploaded on TwitPic, which has a separate Terms, and is an entirely separate entity from Twitter.

Whatever the verdict, this suit may change the manner in which photographers and journalists transmit their data via social media, even in difficult emergency situations like post-quake Haiti.

Do you have legal insight, experience with copyright infringement, or any thoughts about social media and the TOS?