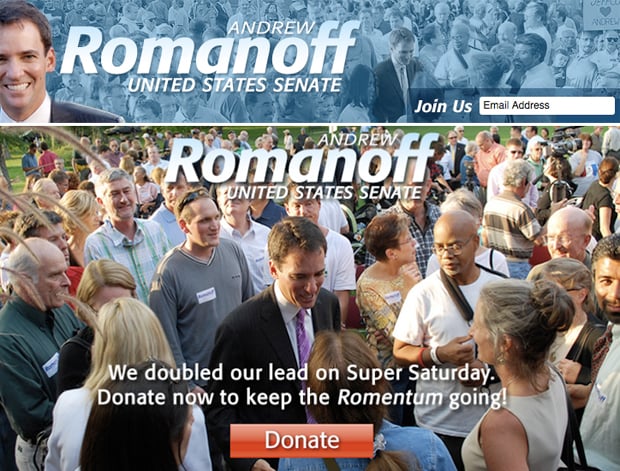 A banner on Andrew Romanoff’s Senate campaign website provoked a bit of an outrage from a minority group when people realized that it was digitally manipulated.

The original photo shows Romanoff, the Democratic candidate from Colorado, at a campaign kickoff.

The photo for the banner was tinted blue, and then had several people from other images spliced into it, presumably in order to make Romanoff look like he was surrounded by more followers. Some of the added people include an African American woman to the right of Romanoff, as well as a Latino American man towards the center of the banner. The photo changes caused some minorities to believe Romanoff was trying to appear like his supporters were more diverse.

The Photoshopped African American woman, Andrea Mosby, told reporters that she has no problem with the photo-tweak, since she supports Romanoff and was at the same rally.

Others disagree on principle. According to the Denver Post, Colorado minority leaders wrote to Romanoff’s campaign, expressing that they were “shocked, disturbed and outraged” that the campaign felt the need to manipulate an image to appear like he had more minority supporters. Some 25 people signed the letter that called the candidate’s integrity into question, saying:

“We are NOT random people to be moved around for aesthetic reasons…We are NOT political pawns to be used when convenient nor do we accept being manipulated and repositioned when it serves one’s political motives…The Photoshopping in of minorities is not acceptable and falls far short of the integrity we expect of candidates running for the US Senate.”

Romanoff’s campaign said that the banner was intended as a photo collage or montage of the event, designed by a volunteer to reflect the overall attendance at the campaign event.

Romanoff later removed the image from the site and issued an apology:

This decision and a description of it have caused offense. I regret that and have removed the montage from our website. I take offense at any suggestion that our campaign attempted to deceive anyone. That’s outrageous and false. I bring a lifetime of commitment to equality and opportunity, and I reject these attacks on my character. I am very proud of the diverse support we’ve already received and continue to earn every day.