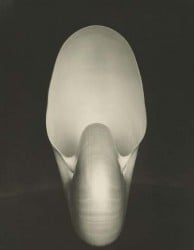 A signed print of Edward Weston’s Nautilus Shell purchased for $10 in 1927 has been auctioned off for a whopping $1,082,500 at Sotheby’s auction house in New York.

We reported last month that the print, purchased by a young photographer named Bernice Lovett, was estimated to fetch up to $500,000.

The photo ended up going for more than double that amount.

Edward Weston created the photograph in 1927, the same year Lovett purchased it at San Francisco’s East West Galleries. The photograph is now regarded as one of the great modernist photographs of all time, and this sale places it among the most expensive photographs in the world.