SquareTrade is a company that provides warranties for consumer electronics. As such, it has a good deal of data on digital cameras and, more specifically, how often they fail. After a three year study of over 60,000 new digital cameras, they’ve published a report with their findings. Surprise! Cheaper cameras have a higher failure rate than more expensive ones.

When comparing failure rate with camera brands, the results are a little more surprising: The study found that Panasonic cameras are the most reliable for both value and premium point-and-shoots. Canon cameras are more reliable than Nikons for cheaper compacts, but for premium models Canon’s reliability does not improve, while Nikon’s improves drastically. Keep in mind this report is only about reliability, not performance or image quality.

Finally, why do cameras fail? The report has a nice graph for that question too: 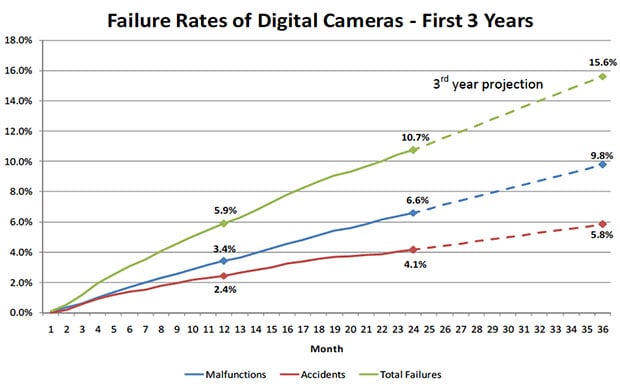 Both curves seem to decrease in steepness after the first year, suggesting that if you have a well built camera and aren’t clumsy or reckless, you’ll probably take care of your camera for a good amount of time.

Finally, here’s an interesting highlight from the report:

For DSLR Cameras, Nikon and Canon were equally reliable.

We’d be interested in seeing a graph comparing actual life span of specific camera models compared with their price. This could provide a ranking of cameras in terms of price per year (of average life).