It’s one of a photographer’s worst fears: dropping your DSLR. Especially for the amateur who may not have a backup, knowing that your camera can withstand a beating has led to some interesting videos in the past.

But while we appreciate DigitalRev’s “paint it pink and light it on fire” approach, protection plan company SquareTrade‘s more scientific test is probably more useful (if less entertaining). In the video above, SquareTrade enlists the help of pro photographer and B&H employee Neil Gershman to drop test Canon’s T5i and Nikon’s D5200. The test was conducted on a rainy day in front of B&H’s NYC superstore. While B&H patrons looked on in what we can only assume was abject horror, SquareTrade dropped the two cameras at the same time from identical platforms 4 feet off the ground.

Once Gershman collected the lenses (both of which popped off and went flying) he was able to put the cameras to the test and see which one came out on top. Initially, it looked like Canon had lost; although both lenses had broken and weren’t staying on properly, the Nikon was still turning on and taking pictures, albeit with no ability to autofocus.

Even after the Canon turned back on a few minutes later, the resulting images looked better coming out of the Nikon/broken lens combo. 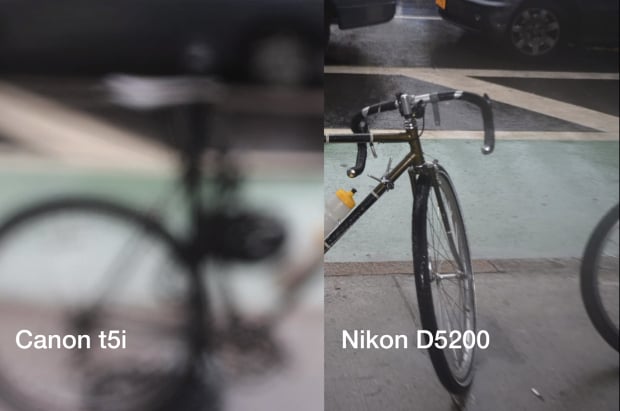 However, given that both cameras worked just fine after the broken lenses were replaced, SquareTrade decided to give the win to Canon. The drop rendered both lenses unusable, and even though the Canon lens was perhaps a bit more unusable, the body itself seemed to sustain less damage.

To see the full drop test for yourself, steel yourself and click play at the top.