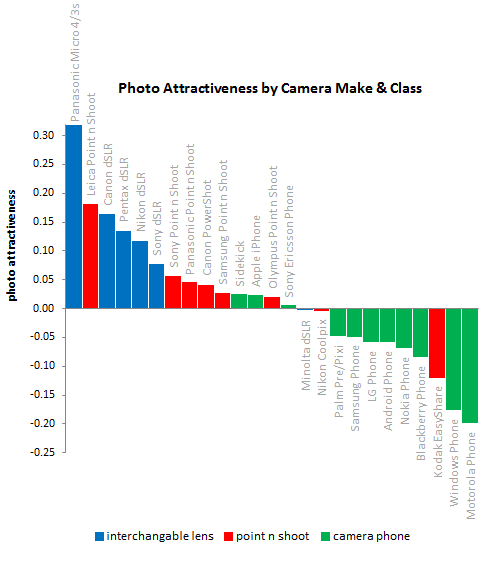 There’s the old adage, it’s not the camera that makes the photographer, but according to a by-the-numbers study by dating site OkCupid, the nicer camera might make you look more attractive.

Based on a random “snap decision” survey hosted by the site (two juxtaposed photos with the question, “Who would you rather date?”), people tended to favor photos of people taken with Panasonic Micro-4/3s, followed by Leica point-and-shoots. DSLRs ranked pretty highly as well, followed by big-brand compacts. Certain camera phones like the iPhone ranked as slightly less, though still producing attractive photographs. Minolta DSLRs and the Nikon Coolpix fell below the attractive standard, along with most other camera phones. Kodak really takes it hard, ranking third lowest with the EasyShare next to the Windows and Motorola phones.

According to the OkCupid blog:

As you can see, the general pattern is that more complex cameras take better pictures. Interchangable lens cameras (like digital SLRs) make you look more attractive than your basic point and shoot cameras, and those in turn make you look better than your camera phone. I’m not sure what’s going on with Kodak all the way to the right there. They might want to consider making sharing more difficult.

It is pretty amazing how much data and an impressive polling pool OKCupid had available to work with — some 11.4 million opinions on hot-or-not photographs.

Obviously, there’s many other factors that play into peoples’ subjective perception of beauty besides camera brand and the quality associated with them. It’s worth noting that this study politely assumes that the egg came after the chicken, and that the subjects weren’t unattractive to begin with. However, according to the numbers, pricier brands can suggest many other factors like the skill of the actual photographer using the cameras. Hey, maybe you can put a price on beauty after all.

The OKCupid numbers study also shows that people photographed with direct flash got down-rated in attractiveness. No huge surprise there either; direct flash with no fill is the bane of portraits.

People also tended to favor photographs of people taken with a more shallow depth of field, especially f/1.2. It makes sense since photographs are more crisp and draw attention to the subject rather than his or her surroundings  (though I suppose an unattractive subject probably still looks more or less the same regardless of aperture).

A slightly more useful piece of information is the time photos were taken in relation to their attractiveness.

There is no apparent relationship between the amount of photos taken throughout the day, which rise and fall during waking hours, and the attractiveness ratings, which seem to function as a wave throughout the day. It appears that peak attractiveness occurs somewhere in the wee hours of night, and again in the mid to late afternoon. This statistic may have more to do with what people are doing at those hours. Or maybe that’s just when all the attractive people are up and about.

So next time you’re out to photograph or be photographed, give yourself a statistically proven hotness boost with a trendy Micro 4/3s, lower that f-stop, and shoot between 2am – 4am and 3pm – 5pm.