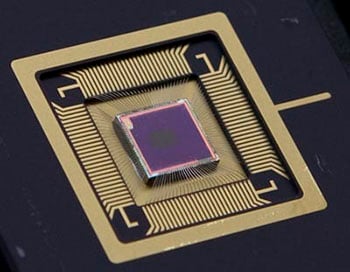 InVisage, a California-based start up company, has announced a new image sensor technology that it claims is up to four times more sensitive than traditional sensor technologies.

Their product, QuantumFilm, is a layer of semiconductor material added on top of the traditional silicon that uses quantum dots to gather light.

According to InVisage CEO Jess Lee, quantum dots have a 90% efficiency in gathering light, compared to the 50% of traditional silicon.

What this means is that we can expect cell phone cameras to improve at a much faster pace than what we’ve been seeing, since improving the performance of traditional silicon has proved difficult. Lee predicts that in two years, mobile phones will contain cameras that are superior than current digital cameras in both megapixels and light sensitivity.

If this turns out to be true, we will likely see a dramatic decrease in the number of point-and-shoot cameras sold, as more and more consumers rely solely on their camera phones.

In other news, Wired is reporting that this technology will lead to wedding photography from phone cameras. Really?