PMA is off to a hot start down in Anaheim, Calif., with Sony announcing a new line of bodies and lenses, aiming to assert itself in the DSLR + video market thus far dominated by Nikon and Canon.

In a brief press conference this morning before the doors to PMA’s massive exhibit floors opened to the public, Sony announced prototype DSLR bodies and lenses that they aim to release this year. 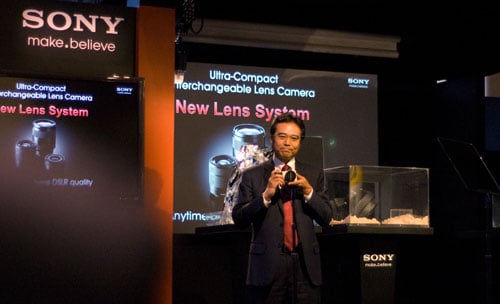 Emphasizing the user-friendly presets on Sony cameras such as its auto HDR mode, Sony showed off a concept model of the compact α (alpha) Micro Four Thirds-DSLR hybrid that they hope will make the DSLR more accessible to a larger audience.  Additionally, the new compact  camera bodies (pictured below) are about the size of point-and-shoots, but have interchangeable lenses. Notice Anything About This Painting?