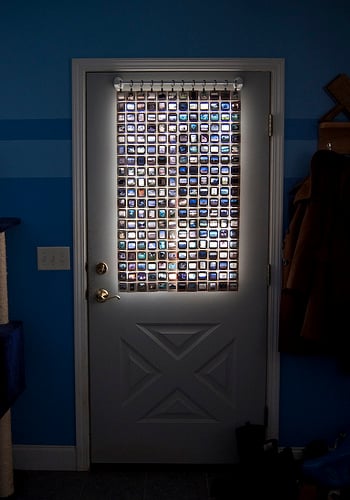 At the beginning of the month we featured a creative lamp shade made using slide film. Here’s a new idea: curtains. Jacki Vance-Kuss over at Yarn Zombie took Kodachrome slide film and aluminum chainmail rings and created a unique curtain for her front door.

Here’s the finished curtains I made out of Kodachrome slides! The slides date from the 50s and early 60s, and are all from a lot of slides I got in Kansas City last fall. The majority of slides on the right panel are of horses. Go figure. Travis drilled 8 holes in the slides using a Dremel tool in a Dremel drill press thingy, and I connected them all using aluminum chainmail rings. 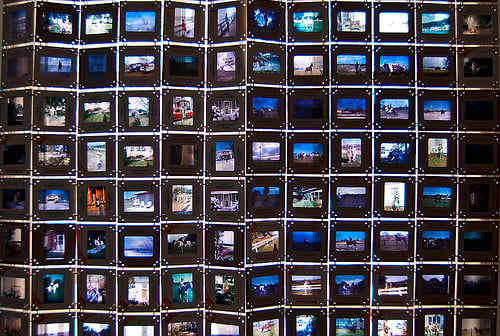 The curtains open and close just like you would expect: 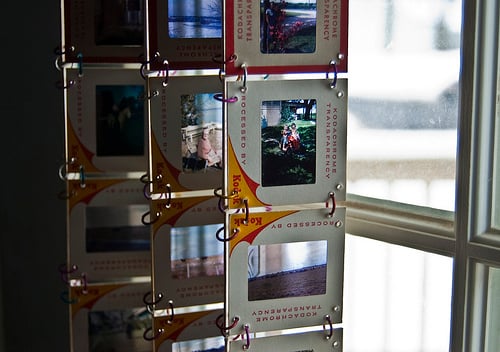 In response to the whole “Won’t it fade?” question, I’m pretty sure that yes, in time, the slides (especially the ones in direct sunlight) will fade. I don’t know how long they’ll last. If it happens in the next week or so, I’ll let you know. :) Hopefully, they’ll last a year or so. I have a ton of old slides, so as they fade, I can just replace them with others. That won’t be any big deal. I think if this was on a north-facing window, the slides will fade a lot slower. Also, I scanned in the most interesting slides, so in case the slides to fade to nothingness, the image is still preserved.

If you have old Kodachrome slide film that you’d like to recycle, this could be a fun project for you.

Image credits: Photographs by yarnzombie and used with permission.