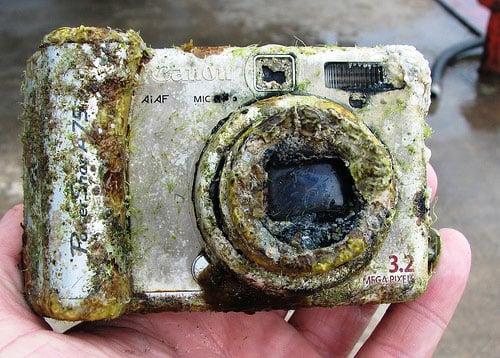 Last Friday an anonymous poster on the photography board of 4chan sparked a discussion that rippled into the blogosphere after freezing their camera to see whether ISO performance improves at lower temperatures.

They stuck their Sony A350 into the freezer for 15 minutes, and posted the following before and after comparison of noise at ISO 3200:

Regardless of whether or not these results were fabricated, it has long been (though perhaps not widely) known among photographers that digital cameras have better ISO performance (i.e. less noise) at lower temperatures, which is why sensors are often cooled for astro-photography. Other photographers also report improved ISO performance when shooting in very cold environments.

Obviously you shouldn’t freeze your nice camera to test this out yourself, but it’s an interesting fact to know, and could be useful if you’re interested in long exposure photography.

Thanks to Nathan Yan for briefing us on thermal noise.

Image credit: Don’t drop your camera! by Island-Life and used with permission.

Camouflage Your Thermostat with Photos

Giving Away a Tamron Superzoom