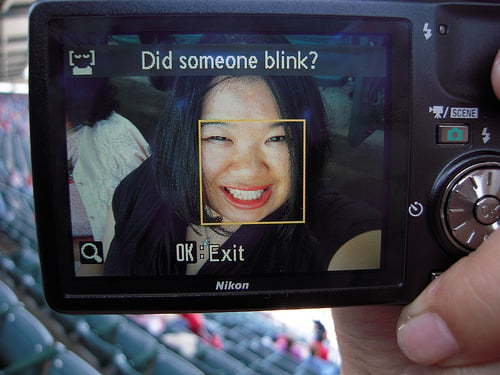 Asian American blogger Joz Wang, of jozjozjoz.com wrote a post titled “Racist Camera! No, I did not blink… I’m just Asian!” last year when she discovered a user-unfriendly feature on her Nikon Coolpix S630.

Whenever she took photos of herself or her family members, the camera would prompt, “Did somebody blink?”

Time.com did a balanced follow-up on the issue, noting that several technologies have problems with face detection on people with non-Caucasian features, much in the same way early speech recognition software had difficulty recognizing different accents.

The principle behind face detection is relatively simple, even if the math involved can be complex. Most people have two eyes, eyebrows, a nose and lips — and an algorithm can be trained to look for those common features, or more specifically, their shadows. (For instance, when you take a normal image and heighten the contrast, eye sockets can look like two dark circles.) But even if face detection seems pretty straightforward, the execution isn’t always smooth.

And why Wang’s eyes may have been more difficult to detect:

The blink problem Wang complained about has less to do with lighting than the plain fact that her Nikon was incapable of distinguishing her narrow eye from a half-closed one. An eye might only be a few pixels wide, and a camera that’s downsampling the images can’t see the necessary level of detail.

HP’s face tracking technology on the HP Pavillion webcam had its share of problems as well:

However, Time was unable to get an entirely straight answer out of the companies as to how and why their products were released before realizing the problem. Nevertheless, thanks to the power of customer complaint and the viral nature of online griping,  Nikon and HP say they are working to improve their product:

Perhaps in this market of rapidly developing technologies, consumers who fork over a few hundred dollars for the latest gadget are the test market. […] With the flurry of consumer complaints out there, most of the companies seem to be responding. HP has offered instructions on how to adjust its webcam’s sensitivity to backlighting. Nikon says it’s working to improve the accuracy of the blink-warning function on its Coolpix cameras. (Sony wouldn’t comment on the performance of its Cyber-shot cameras and said only that it’s “not possible to track the face accurately all the time.”)

Still, this begs to question what the flaw might be in how products are tested, by whom and with whom.