David Baker is the photoblogger behind milouvision. 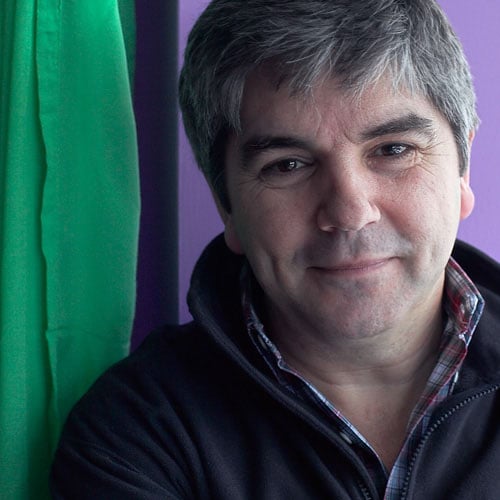 PetaPixel: Can you tell me a little about yourself?

David Baker: I’m 46 years old and live in Southampton on the south coast of England. I’ve worked for a government agency for the past 26 years latterly in a legal/policy environment and I view my photography as an effective antidote to my office life.

I started using a Canon A70 in about 2003/04 when my wife, Stef, and I began visiting stone circles, dolmens and standing stones. Despite my advanced years, I used to be a keen online Unreal Tournament player and during a lull in competitions and tournaments, a fellow player talked about his new camera, a Canon 300D, and suggested that I also buy one as I had become disillusioned about online gaming. This occurred at the same time when it was confirmed that I had no musical ability at all. A friend in Cornwall is a marvelous guitar player and after a visit, I thought I’d be one too. Sadly not. So, in January 2005, trying to engage a creative aspect of myself, I also bought a 300D.

Almost immediately I wondered what I had let myself in for as I had always used the A70 on auto mode. I started reading magazines, books (fortunately Southampton has an excellent library) and looking at other images in various exhibitions and photoblogs. In the spring of 2005, I started posting images on a web forum and as a consequence, in November 2005, Jamey (of http://www.jameyhoward.com/photoblog/) started a photoblog and convinced me that it was a good idea to start one too. I choose milouvision as my online gaming name was milou (I was a huge Tintin fan and milou is Snowy). 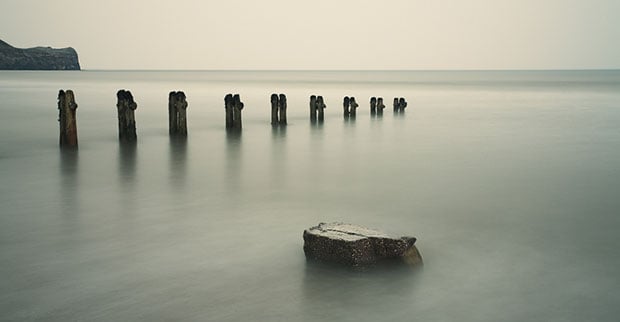 PP: Which are your favorite Tintin comic books?

DB: It has to be The Black Island. When I was a child in the 1960s, my mum used to return from a jumble sale with a big roll of comics – the Beano, Topper etc – and occasionally there was a Tintin book amongst the weeklies. I think the first one I saw was The Black Island and for a youngster from a small provincial market town it promised adventure.

PP: What equipment do you currently use?

DB: In January 2006 I bought a Canon 5D which I’ve only just sold due to the purchase of a 5d Mark II. For 95% of the time, I use a 17-40L lens. I also use a 50mm prime and a 70-200 zoom and I use a tripod about 80% of the time. I also regularly use Lee ND grads and a Lee ND plus a polariser and the mighty B+W 10 stop ND which I’ve just replaced as I dropped my 5D Mark II on its first outing in very high winds. I got distracted and the whole set up fell onto the rocks albeit from a very low height. The camera was ok but my 10 stop ND was smashed and buckled on the 17-40 lens. I used a knife to take out the filter glass and fortunately the front element of the lens wasn’t scratched. I then used the knife to tease the remains of the filter from the lens thread and again fortunately the thread wasn’t stripped although it looks likely that it’ll have to be replaced. A little later whilst cleaning spray off a Lee grad, the wind whipped it from me and it scuffed on the rocks. 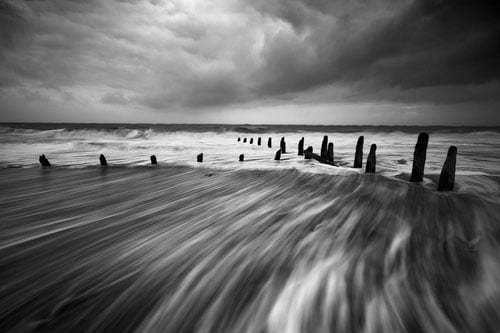 DB: A Canon 16-35. Maybe. Is it better than the 17-40? I don’t know. One thing against it, is that there’s no 10 stop ND filter for the filter ring size. An alternative would be a Zeiss Distagon either 18 or 21mm. A 100mm Canon macro lens is on the cards as I want to explore some still life work and I really ought to get around to sourcing a new tripod ball-head.

I do a lot of square cropping so I’d love to be able to do that in-camera by having a button that changed the format from 3:2.

Every now and then I think about exploring large format. 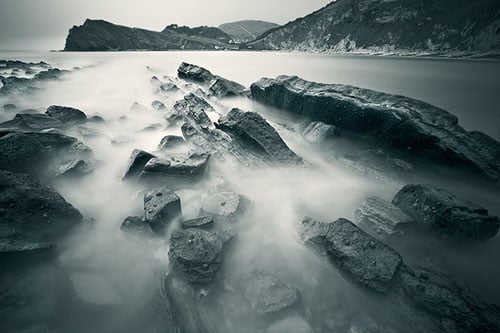 DB: Coast hugging. My main photographic passions are sand, sea, stone and the odd cow. I saw a photograph by Guy Edwardes in Outdoor Photography magazine of Keyhaven beach and the sea looked fantastic drawn over the shingle beach. I tried it myself a week or so later and that was that, I was caught. It’s a fair comment that the majority of my work is a variation on a theme. 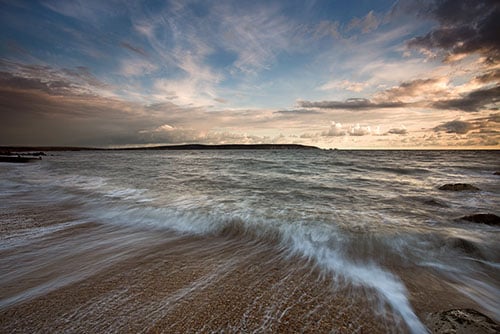 PP: What is your goal in photography?

DB: The wildlife photographer Andy Rouse once said that landscapers are those who try to get in focus two rocks that are seven miles apart. There’s a goal. Alternatively, it’s getting that ultimate coastal shot. The one that always eludes and you almost get it. It’ll never be caught as what then?

A year or so ago, I wanted to exhibit so I was fortunate to exhibit twice in the past year. I have just started a couple of photo projects – stone and wood – to motivate me. I wrote a guide to Westdale Bay in Pembrokeshire (http://freephotoguidesukwales.blogspot.com/2009/06/westdale-bay-pembrokeshire.html) last June so I would like to add more to the free photo guide project (http://www.freephotoguidesuk.blogspot.com/). 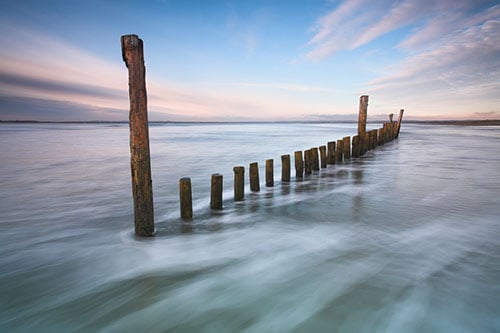 PP: Are there any special tricks you’ve picked up for photographing the coast?

DB: It may sound a cliché but getting to know ‘your’ part of the coast is invaluable in terms of assessing and recording the changeable nature of light, the tides and the way the coast evolves and changes the landscape. See it in the wonderful dawn light – it’s worth the early start! Other than that, get to know the tide tables, chase ‘bad’ weather so that you can shoot in the changeover from ‘bad’ to ‘good’, accept that you will get wet, even if the waves are counted, and buy a decent pair of wellies. Hopefully, it’ll all help to being a committed coast-hugger.

PP: What’s special about the “changeover from ‘bad’ to ‘good'”?

As an example, I followed a rain storm from Southampton to my local patch of coast at Keyhaven. The rain had cleared the air of dust so I shot in good light with all the drama ahead sweeping across the Solent providing rain clouds lit from underneath by a setting sun. PP: How much do you shoot?

DB: I’ve stopped coming away from a coastal location with 300 shots of essentially the same scene. In terms of how many shots at a particular site, it’ll depend on what I’m trying to achieve. I’m getting more fussy in my old age about the available weather conditions (something which I’m trying to correct) principally due to being frustrated by the potential of a location if only the clouds were just so, or there were less people or if only the headland was over there. Dreadful. I should work at it. I really like being surprised by a location especially one that I know well, where I think I’ve seen all this before and then all of a sudden the elements come together. I think landscapers are eternal optimists and even though there might be moans and groans when the weather is poor, we’ll still make the trip out. 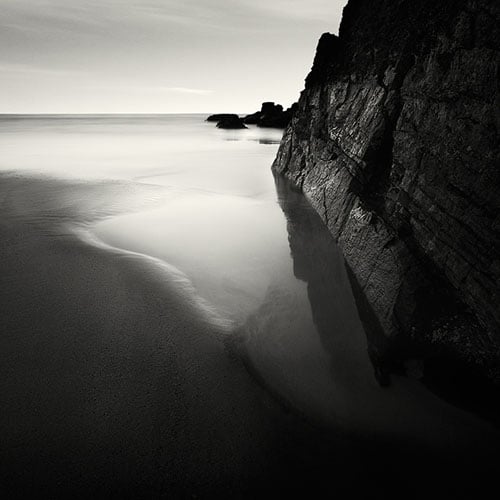 PP: What have you learned about photoblogging since starting your own?

DB: That the support, encouragement and inspiration of fellow photobloggers is immense.

PP: How many photographs do you have tucked away at this point?

DB: I’ve just sold my 5D which after three and half years use had a shutter count of 14,000. I’m a fairly ruthless editor. My back up folder is 273gb which includes RAW files, 16 bit TIFFs, jpegs, stock images – well, everything. I’m always chopping away at the images in periods of self doubt, deleting material left, right and centre. 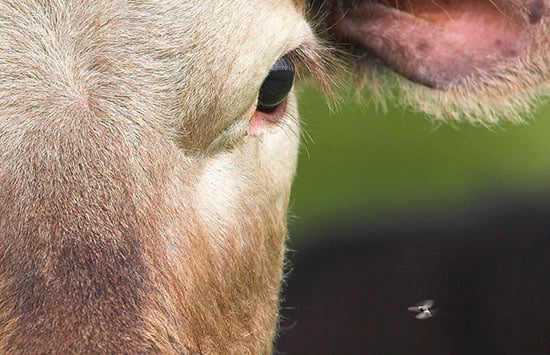 PP: Have you tried your hand at HDR photography?

DB: I’ve blended two images from a RAW file – one for the sky and the other for the foreground. I’m not sure if that counts. The principle issue I have with ‘extreme’ HDR is that there’s often a strong light source but without the attendant shadows.

PP: Who are your favourite photographers?

DB: Joe Cornish, Charlie Waite and David Ward for landscapes, and Michael Kenna for mono and duotone work. I’m also a big fan of Fay Godwin. I’m fortunate in being able to have collected about 100 photo books, some second hand. The Michael Kenna books are beautifully produced. I have a regular sort out. I also follow a whole host of photobloggers who provide an enormous amount of inspiration and motivation. 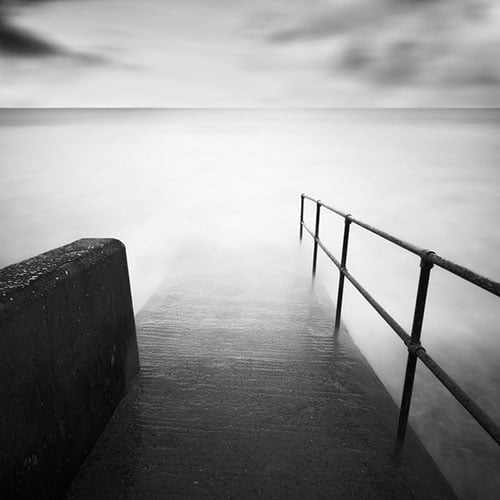 PP: Who is one person you’d like to see interviewed on PetaPixel?

DB: It’ll have to be my pal Gary or Tristan.

DB: Have fun, stay fluffy, and to paraphrase Andy – cheers for reading, and if you’re a follower of my photoblog then many thanks.

Photos from Earthquake in Haiti, Mobilizing Global Compassion and Action