Here is a quick look at some interesting photography projects that present a manipulated view of reality, along with thoughts on how they were done and how you can accomplish the same thing.

This project, created over a four year period starting in 2005, gives an interesting glimpse at what Los Angeles would look like if people and their vehicles instantly disappeared off the face of their earth. 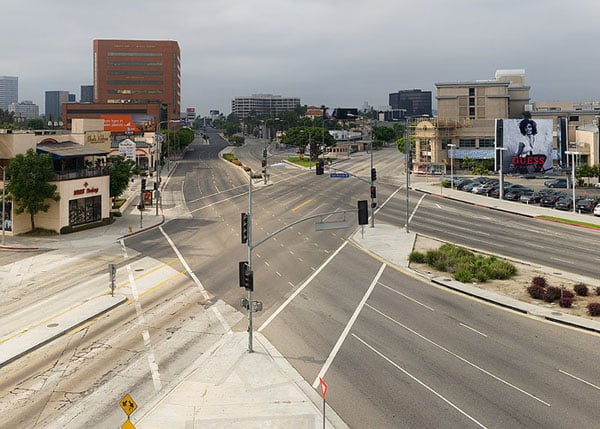 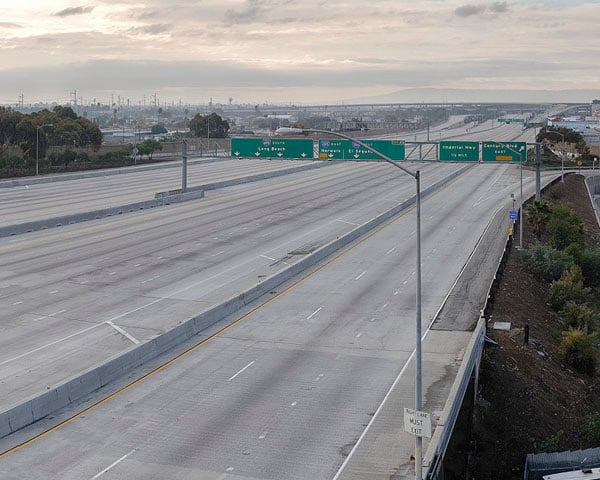 There’s are a few ways you could accomplish this.

First, you can stack neutral density filters on your lens to enable extremely long exposure times. The long exposure would cause everything that moves (i.e. people and cars) to disappear from the scene.

However, it doesn’t look like Logue employed this technique, since the clouds in his photographs are clear and well defined. You would also expect trees in long exposure photographs to be soft and blurred, since the leaves are constantly moving.

A second option is to take a very large number of photographs, and then use an image editor to combine only the portions that don’t contain any people or cars. Doing this at a time when the road is least busy would obviously be easiest if editing by hand, though Logue has quite a few shots from busy hours of the day. Photo editors like Photoshop or Enfuse can also help you automatically stack images and filter out non-constants.

Visit the project page to see the rest of the photographs and/or to buy the book.

#2: Tokyo Nobody by Masataka Nakano 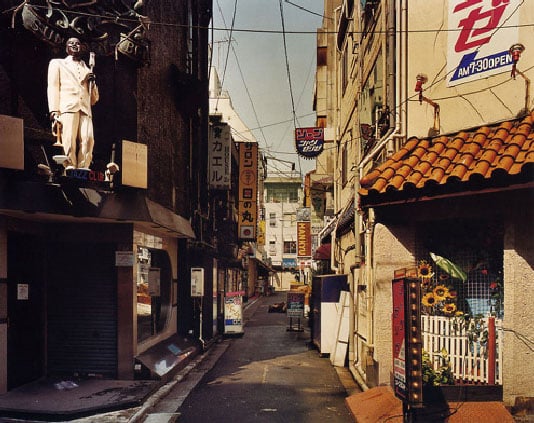 This project is unlike the other three in that no clever image manipulation was done. Nakano visited ordinarily busy locations during times of low activity (i.e. major holidays), and patiently waited for just the right time to make each of his photographs.

You can also purchase his paperback book on Amazon.

At first, many of Peter Funch’s New York City street scenes seem ordinary. Then, as you look closer, you begin to realize that in each one, there’s something eerily similar with everyone in the scene. Perhaps everyone is holding a manila envelope, or is smoking, or is running, or is looking in the same direction, or is yawning, or is homeless.

You get the idea.

The amazing thing is, these photographs weren’t staged, but rather manipulated.

Funch took each of these photographs two weeks at a time, found people in the frames who had something in common, and stitched the photographs together using an image editor.

While the first two steps (shooting and selecting) are time consuming, the third step (stitching) is what’s difficult. The idea is similar to what we outlined in our “cloning yourself” tutorial, but rather than having a static background that you can easily mask over, stitching this type of photograph might require a pixel by pixel degree of care, since people are constantly walking around in the frame.

You can tell that this stitching is the technique used by Funch by observing that in some of the photographs, the lighting is different for various people in the frame.

Check out the rest of the photographs in the series in this gallery.

Bahbak Hashemi-Nezhad shot his orderly conduct series of photographs in three locations: London, Amsterdam, and Toyko. The idea is identical to what Funch did in NYC. 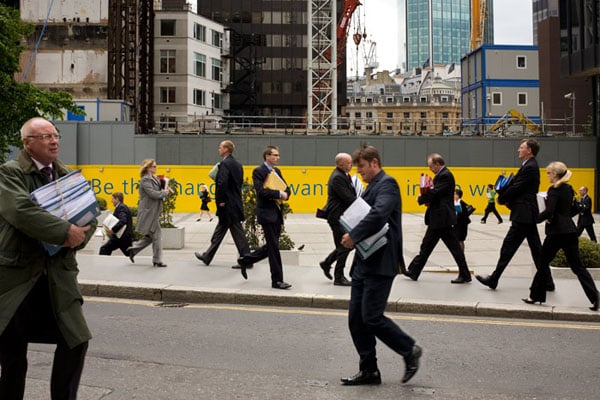 Most of Hashemi-Nezhad’s photographs are easier to accomplish than Funch’s for a couple of reasons.

First, many of them are taken indoors, where the lighting conditions don’t change. This makes it much harder to detect image editing, since there aren’t lighting difference between people in the indoor scenes.

The sparseness of many of the scenes also makes for easier editing. Many of Funch’s photographs were taken up close with people moving around in the frame and overlapping one another. Many of Hashemi-Nezhad’s photographs have minimal overlap between people, and constant backgrounds. This makes it much easier and less time consuming to stitch the photographs together.

For the rest of the Orderly Conduct photographs, you visit his website here.

Hopefully you saw something new in this post that you hadn’t seen before, and that it inspired you to experiment with some new ideas.

If you have any comments on this kind of project, please leave a comment! We’d also love to hear from you if you have links to other similar projects!