My first DSLR camera was a Canon 20D that my parents purchased for me as a graduation present back in August of 2005. We went to the store expecting to purchase the camera for $1,599, but found that it was selling for only $1,299. Boy was I excited. Looking back, I consider purchasing that 20D the worst photo-related decision I’ve ever made.

When other photographers see some of the lenses I own (i.e. 24-70mm, 16-35mm), they often wonder how I can afford such expensive gear. After all, I was only an unemployed college student from a middle-class family. What most people don’t know is that I almost exclusively purchase my equipment used from sellers on craigslist. This article is about everything I’ve learned through years of buying and selling camera equipment on that site. If you have the money to purchase the gear you want new, then this article obviously isn’t for you. However, if you want nicer gear without paying absurd amounts of money (maybe photography is just a serious hobby for you), then these tips might be useful to you.

First of all, something I’ve found very useful over the past years is keeping a detailed log of equipment transactions, since it helps me to keep track of how much I’ve spent on this serious hobby of mine. I do this in a Microsoft Excel file, but any spreadsheet software or website (i.e. Google spreadsheets) will do. 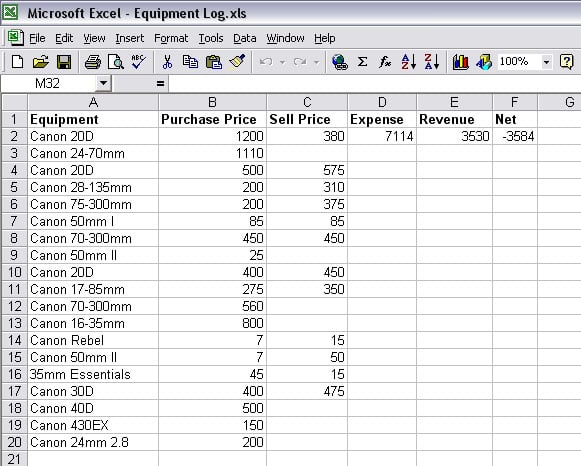 The columns I add entries to are “equipment”, “purchase price”, and “sell price”. The values in “expense”, “revenue”, and “net” (cheesy names, I know) are automatically calculated (i.e. expense is “=SUM(B:B)/2”). As I add purchases and sales to the log, I see how much money I’ve given, how much I’ve received, and what my net spending (or earning) is at the current state.

In the log above, you can see that I’ve spent a net of $3,584 on all the camera equipment I currently have. If I were to sell everything I currently have at very reasonable prices right now, my chart tells me that I would have only spent a total of $300-$500 on all the photography I’ve done since I purchased that 20D back in 2005. That’s roughly the cost of the point and shoot camera I used throughout high school before it finally broke during a trip to china! In fact, the reason I’m still at a net loss right now is because of the few bad choices I’ve made along the way (20D, 24-70mm, 70-300mm). If I had followed what I’m going to write in this article from the very beginning, I would have actually ended up making money while using professional gear at the same time.

So what have I learned?

This doesn’t mean knowing how much a camera body or lens retails for. This means knowing the average price a certain piece of equipment is being successfully sold for on craigslist. After all, if you don’t know how much something is worth, how will you know when you see it being sold for a good deal? If you see multiple listings of a certain piece of equipment that are roughly in the same price range, then that’s probably pretty close to the street value.

Now that you know the street value of what you want, avoid it. If you buy it at street value now, you’ll have to sell it at lower than what you paid for if you ever sell it later down the road. If you look at my equipment log, you’ll see that most of the time I sell something, it’s either for the price I originally paid or higher. I’ve often used a lens or body for quite a long time and many actuations before selling it for a good amount more than I paid. 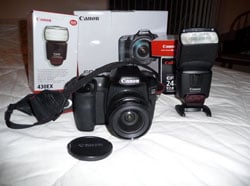 It’s pretty much always the case that someone selling multiple items together as a package must sell it for significantly less than the sum of each item separately. They are, in a sense, exchanging the extra money they could earn for the time they save by selling it all at once. This presents a great opportunity for the photographer looking for a good deal on a particular item in the package. If a package you come across includes a piece of equipment you want along with many pieces you don’t want, and is extremely cheaply priced, buy it all and sell off everything you don’t want. If the price was good enough, there’s a good chance you’ll end up paying nothing for the gear you wanted after selling off the rest.

This is what I wish someone would have told me before I started out, since I sold the original 20D I purchased for $1,200 a couple years later for $380. The moment you take the first photo on a camera you purchased new, the value of the camera instantly plummets. Furthermore, camera technology advances very, very quickly, and the next model of your new camera will be released within the next couple years. When this happens, your camera instantly depreciates even more.

The moral of the story is, buy camera bodies used and from a couple generations back (since depreciation will be much slower). Also, “upgrade” often (you’ll want to anyway, right?). This allows you to constantly move up in camera technology without paying extra money.

Lenses made for the Canon EF and Nikon F lens mounts are interchangeable and can be used on cameras from as far back as 1987 and 1959 (respectively) and as recent as the latest models. Lens quality and features do not improve nearly as fast as the camera bodies they’re used on, so it’s possible hold onto a professional lens for many years without losing much of its street value. The caveat is that if you accidentally break the lens this tip goes out the window, so take very good care of your gear. Always use a filter.

I’ve found that top of the line lenses (like Canon’s L series) depreciate least quickly, and probably won’t break or fail on you due to their spectacular build quality. As a result, I don’t own any EF-S or third party lenses, though I’m sure you could go for those and do just fine as long as you go for high quality ones that get good reviews. 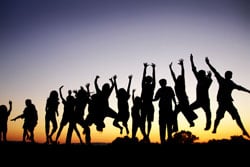 Even if you don’t plan on adding the lens to your collection, you will be able to try out a wide range of lenses while pocketing money after you’re done with it. People sometimes pay to rent lenses they’re interested in, which seems funny to me (unless you’re pro, rich, employed, or all of the above). Why rent when you can buy, sell, and profit?

People also talk of variations in sharpness and quality from lens to lens. This is definitely true, but is all the more reason to buy lenses used on craigslist. Some people buy and return a lens repeatedly in order to find a “good copy”, but buying and selling the lens on craigslist will help you do the same thing while potentially putting money in your pocket.

Never Sell Interchangeable Accessories Along With Your Gear

A couple years ago when I sold a copy of the 70-300mm, I threw in a B&W filter along with it, thinking I didn’t need it anymore. B&W is a pretty high-end brand when it comes to filters. When I needed the filter again in the future on a different lens, I didn’t have it. Don’t include things like filters, extra batteries, or extra memory cards when you sell off gear, since you can keep those things for future use (and they don’t really add value to what you’re selling anyway).

If following the guidelines I laid out in this article was as easy and straightforward as I made them seem, then I’m sure a lot more budget conscious photographers would be following these tips to save money on their gear. The truth is, there are definitely a lot of risks, dangers and things to avoid that I’ve come across and learned from as well. My next post will deal with how to know when to buy and when to run away from the deal. That’s the second part of this two part series, so stay tuned!

Update: My new article on how to make safe and smart decisions for used gear on craigslist can be found here: A Guide to Buying Used DSLR Gear.