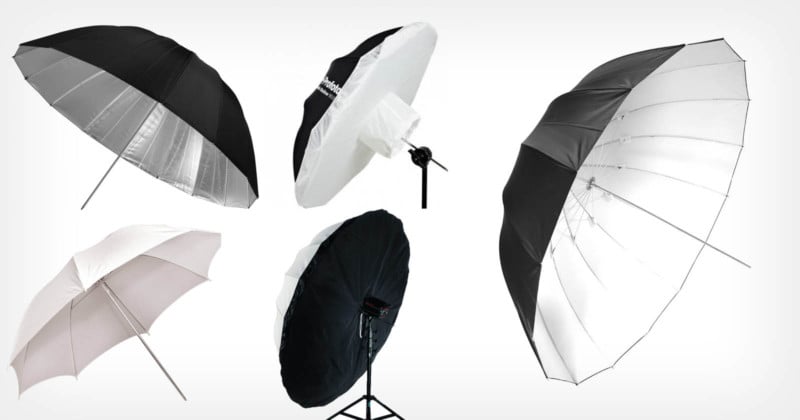 Umbrellas are perhaps the most under-appreciated light shaping tool around. Due to their low price and wide availability, they are considered by some to be only for those who are beginners. This couldn’t be further from the truth.


The umbrella is a fantastic modifier that is loved and cherished by pros and beginners alike. Here is a basic photographer’s guide to umbrellas.

What is a Photography Umbrella?

As the name suggests, umbrellas are a light modifier that can open and collapse just like the regular umbrella people use on rainy (or sunny) days. An umbrella is one of the easiest ways to create soft and/or diffused light. Depending on the type, an umbrella may reflect, bounce, or diffuse light.

Let’s look at some common types of umbrellas. 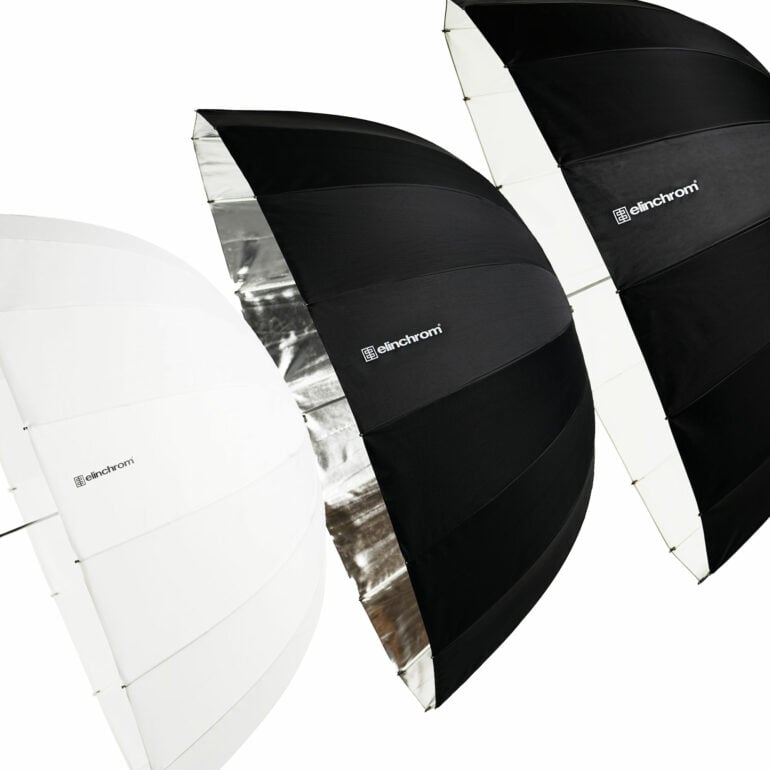 These are the first umbrellas to ever exist. They are made out of translucent diffusion fabric that will diffuse the shadow edges, and depending on the size a shoot-through umbrella will produce light of different softness. The smaller the umbrella the harder the light. A shoot-though umbrella will create a hotspot in the middle as the light source is aimed directly at the subject. 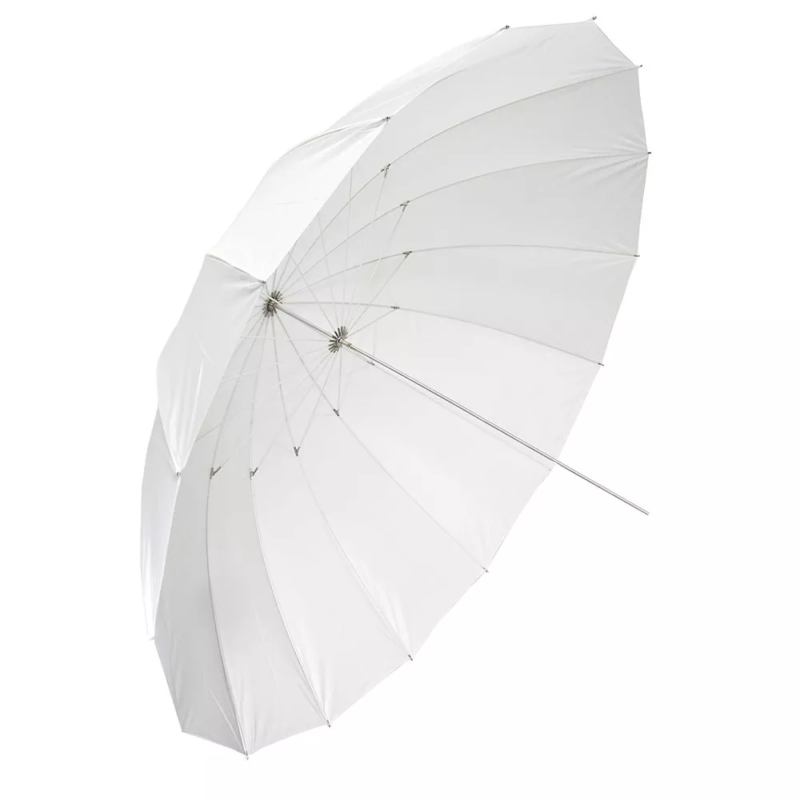 A white umbrella will be indirect and will require the light to first hit the umbrella, bounce in the modifier, and exit on the same side. As such, this light source creates an indirect bounced and diffused light. Depending on the size, your light can also be quite soft. The light spread of white umbrellas will be quite large when compared to silver ones. These are a common choice among portrait and fashion photographers for the light they produce. 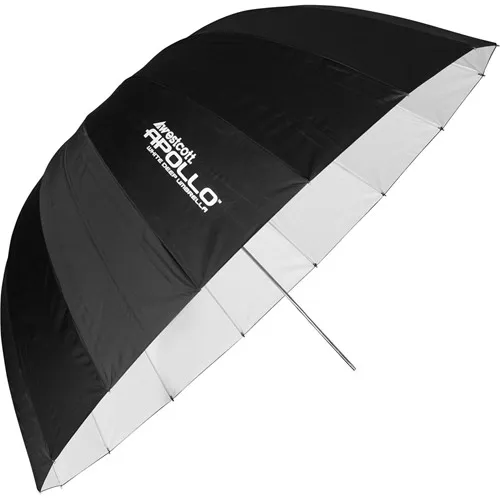 These reflect light and have a smaller light spread which creates light with more direction. Because they reflect instead of bouncing a silver umbrella will be more efficient. That is why on-location a silver umbrella is more preferred than a white one. In small sets, it will appear to produce harder light, which is why a silver umbrella is best used with a fill light in smaller studios. 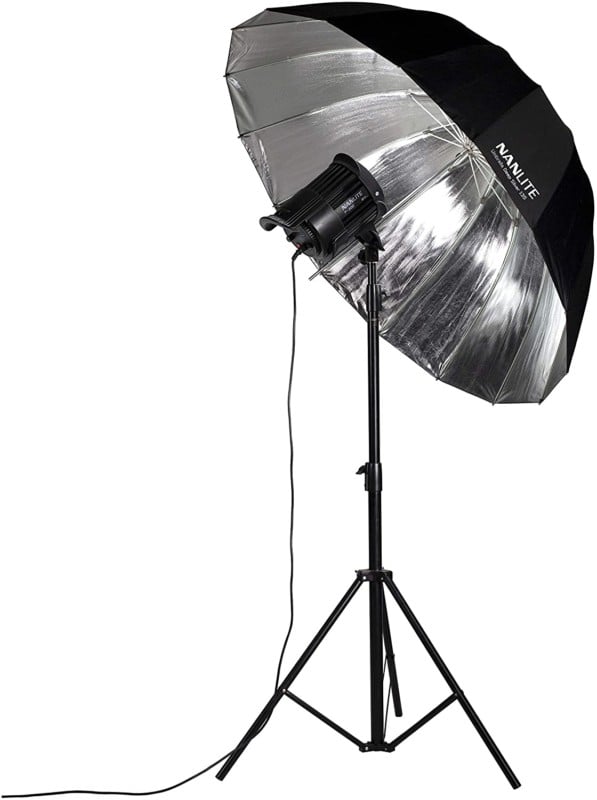 An important thing to note is that the softness is determined by the size, not by the material. A common myth is that white umbrellas produce softer light than their silver counterparts. In fact, a white umbrella will have a wider light spread, which in small rooms will result in light bouncing everywhere and filling in the shadows. Taken into a field, silver and white umbrellas make the exact same soft light. 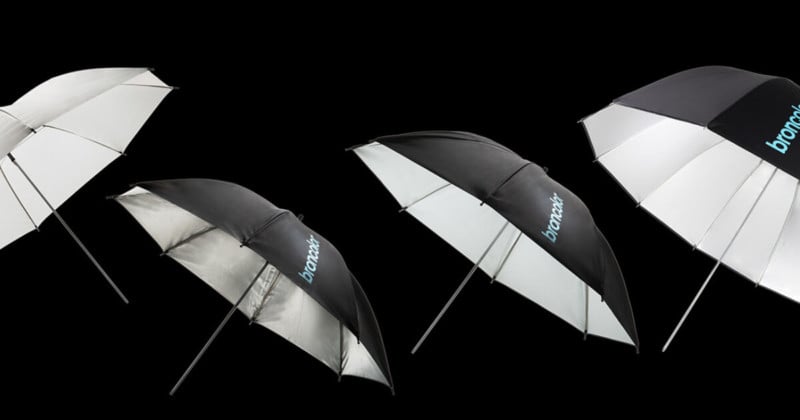 Nowadays there are two common shapes for umbrellas: deep and shallow. Shallow umbrellas will create a much wider light spread, which is useful when lighting large groups, backgrounds, or even portraits. Deep umbrellas on the other hand will have more direction to them which will result in somewhat increased contrast.

Deep umbrellas have the ability to be focused to some degree. But don’t be misguided when a company claims to have parabolic umbrellas. Those are impossible to create if they are truly parabolic. A deep-looking modifier isn’t parabolic, if anything it’s false advertising. 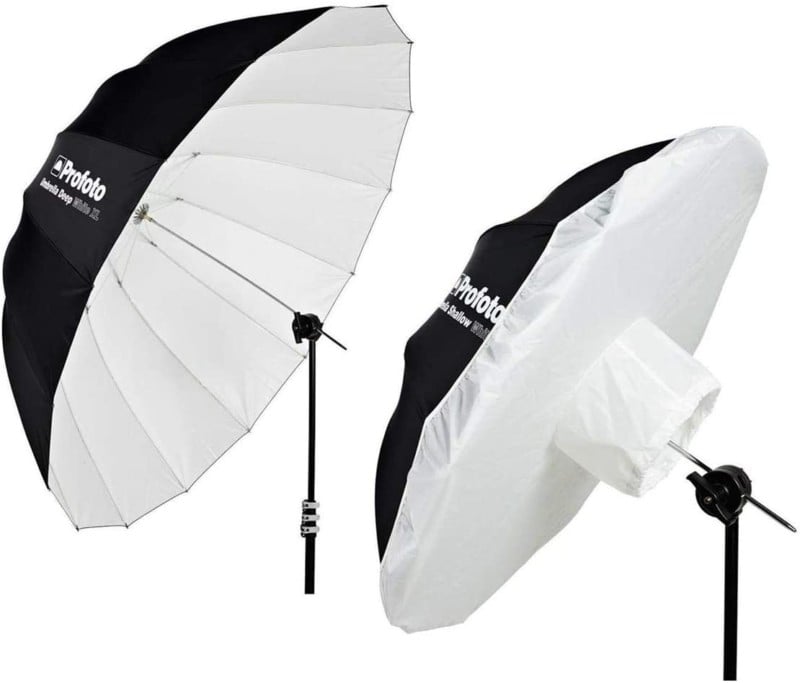 I personally use both deep and shallow umbrellas, almost interchangeably. Shallow ones tend to be cheaper. If you want to experience true parabolic modifiers, rent a Broncolor Para or Briese. 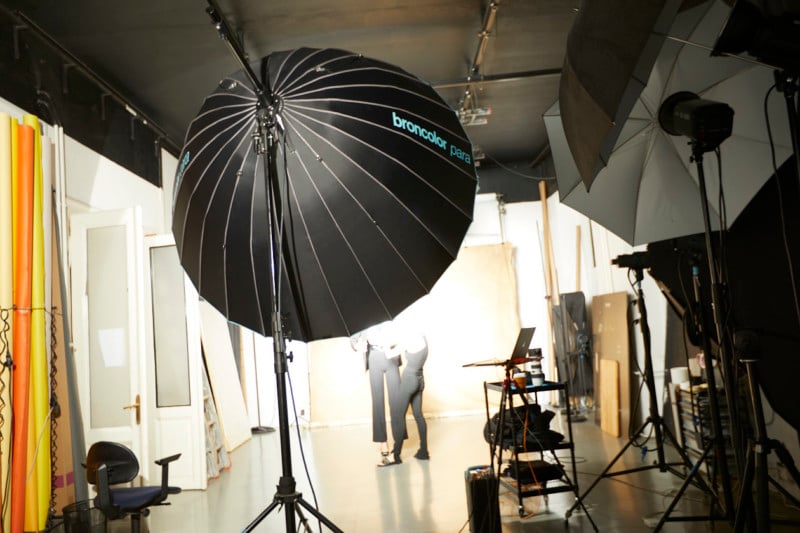 There is a series of ParaSail umbrellas designed for low-ceiling rooms. These seem to be really interesting, however, I’d suggest trying out regular umbrellas first. The shape of the light source (in the case of a ParaSail rectangular) will determine how the shadow edges look, just as how a 1×6 softbox will make soft light vertically but hard horizontally.

Few people know precise details of how the modifier influences the light, so starting out with a round umbrella is usually the best course of action. 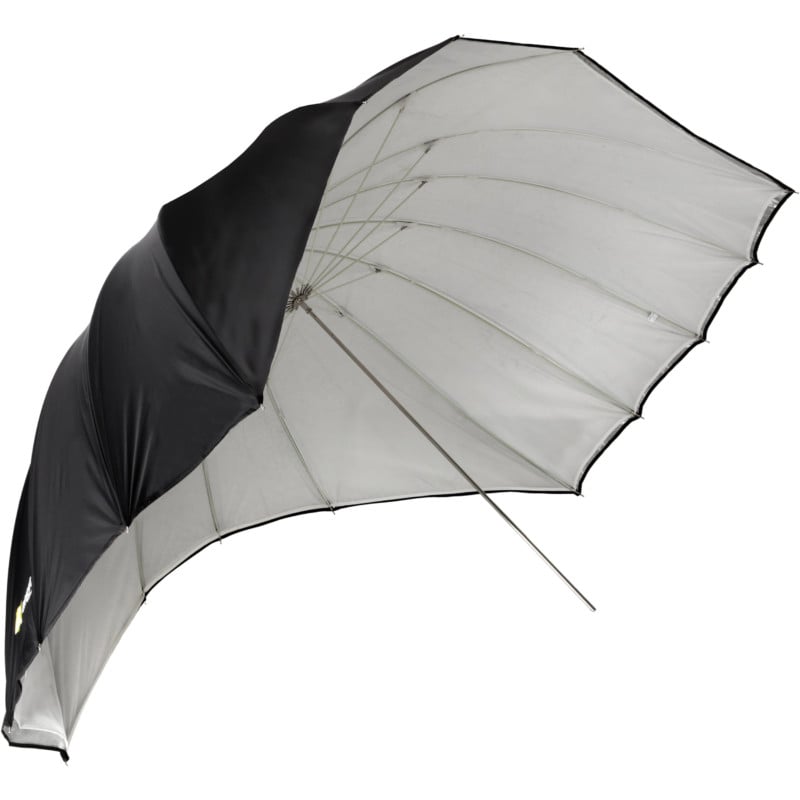 There are many ways to accessorize your umbrella. Here are some common ones.

Contrary to popular belief these won’t make the light softer, they will however diffuse the light — the difference between soft and diffused being a topic for a separate article. A diffuser is great in combination with a silver umbrella as it increases the light spread. Another way to use a diffuser is with a white umbrella if you want to create incredibly soft and diffused light that has a wide spread, and is flattering to the face. Annie Leibovitz has been known to use this very frequently on her portrait shoots. 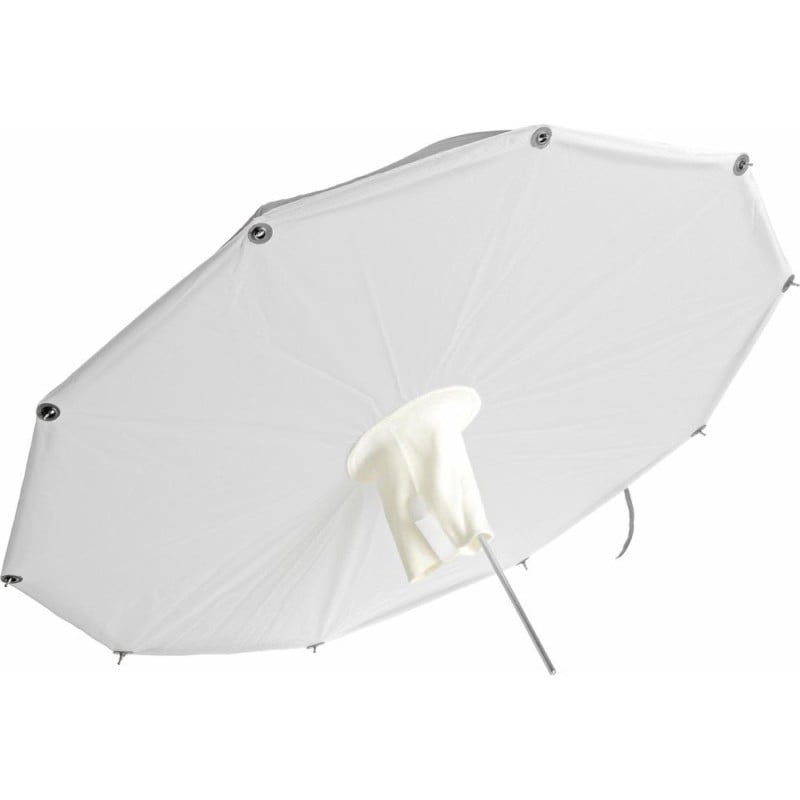 Translucent umbrellas don’t only pass light through but also bounce some back. This is undesirable as it creates an unnecessary light loss. Therefore, a back panel can be added to a translucent umbrella that will contain and reflect the light going in the wrong direction. 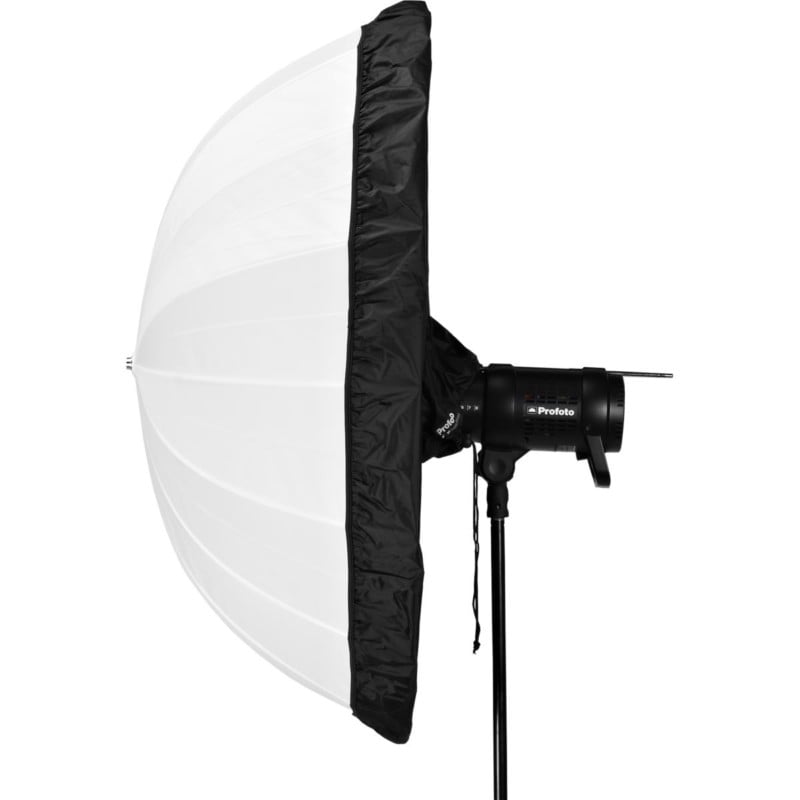 How Does a Photography Umbrella Work?

There is not much to understand about the principle behind umbrellas. A translucent umbrella acts like a scrim, it takes a small light source, increases its size hence making it softer as well as more diffuses and even.

Any other umbrella where the light is shining indirectly will work in a different way: light will first hit the bottom of the umbrella, and then be reflected/bounced around while modifier filling it. If a diffuser has been added, that light will bounce a few more times and exit in a very even, orderly fashion. 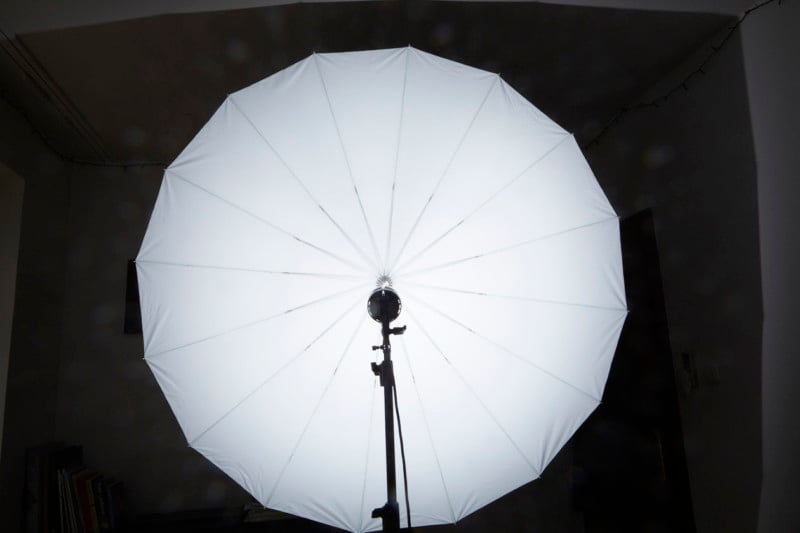 For this image, I wanted an even light spread and nice reflections. I used a large 65” umbrella with a diffuser to light the scene evenly and create soft flattering light.

Umbrellas will be useful when lighting backgrounds or creating dramatic effects. Photographers have used large umbrellas as fill lights in images. For example, in this photograph I used a large umbrella to fill in the dark shadows created by a specular light source placed quite close to the model. Moreover, I used one more to get a gradient on the background. 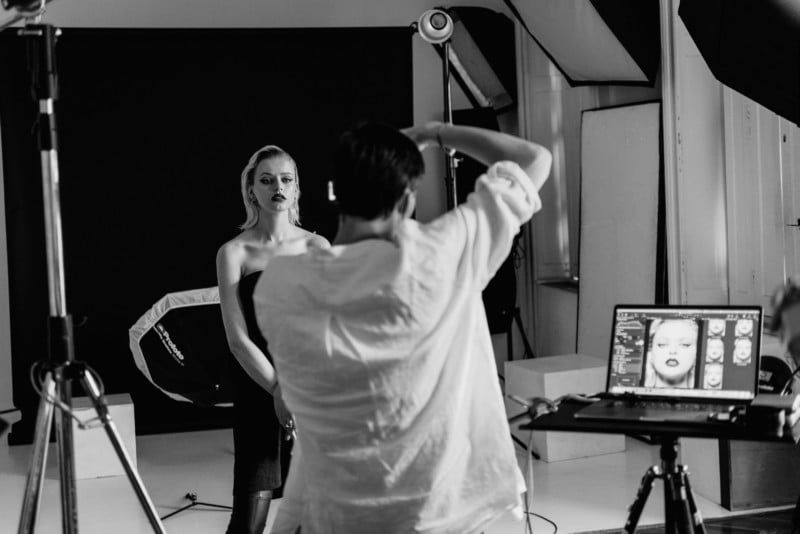 While portrait and fashion are the most common places to find umbrellas in use, they have been used by sports, still life, headshot, interior, and other photographers. In short, if you want to get started with flash photography in your desired genre, you may want to consider buying an umbrella.

No matter at what point in your career you are, umbrellas are a fantastic tool to add to your arsenal. Listing all the brands, names, etc. is pointless here as there are a lot of good umbrellas on the market. As they are generally priced quite affordably, umbrellas are a great choice for beginners too.

Don’t be fooled by a more professional-looking softbox. Neither is better or worse — they’re different modifiers serving different purposes.