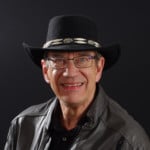 For 23 years, Jim Mathis owned and operated the premier custom Black and White photo lab in Kansas City. As the digital era approached, he turned his attention to Photoshop and digital photography. He has had a life-long interest in history and especially the history of photography. He collects vintage cameras and at one time curated a photography museum. He has taught History of Photography, Professional Lighting Techniques, and Basic through Advanced Photoshop classes at local colleges. His current business is restoring old, faded, or damaged photographs. Additionally he has written eight books and writes a weekly blog about photography and business.

The story of the American West is filled with many characters and large personalities. How the West was won or lost, depending on which side you were on, can be told through the lives of many people. Not all were cowboys, outlaws, gamblers, or lawmen like are often portrayed in the movies and novels; some were photographers. One of the photographers whose story looms large is William Henry Jackson.

How Long Do Photographs Last?

How long do photographs last? The answer to that question is not as simple as we might think. There are many variables such as the process used, environmental issues, as well as at what point do we consider the photograph unusable?

Stereo Photography: A Look at the Origins of 3D Images

Virtual reality, or VR, is not a new thing. The idea that our left eye and right eye see the same thing from slightly different angles and that our brains combine these two distinct images in such a way that we can see in three dimensions has existed since at least the early 19th century. It was first demonstrated by Sir Charles Wheatstone in 1838.

The Three Eras of Photography: Plate, Film, and Digital

After being invented in the early 1800s, photography and cameras have gone through three major eras: the plate era, the film era, and the current digital era. This article is a brief history of photography through the lens of these eras.

Colorizing B&W Photos Then and Now, From Oils to Neural Filters

The day after photography was invented in 1839, somebody pointed out that the photographs were just shades of gray – there was no color. The photography inventors knew this was a problem and probably hoped that no one would notice. Paintings were in vivid color and if photography was ever to compete with painting, there needed to be some color in them.