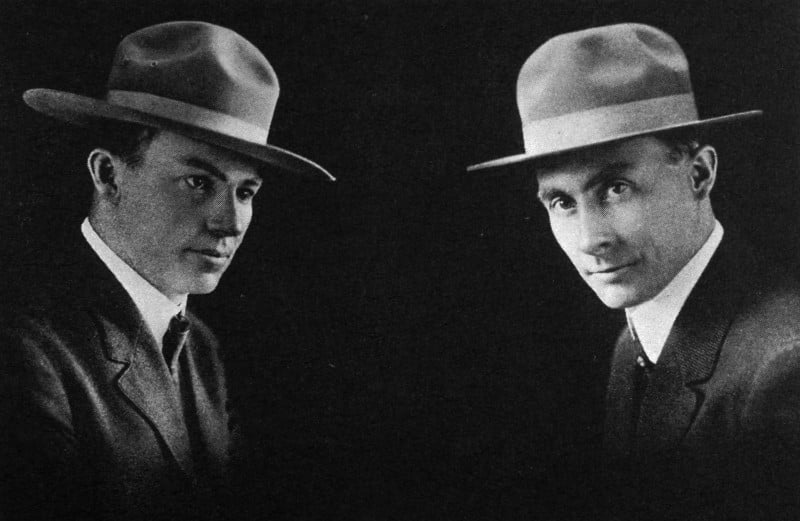 Few people had visited the Grand Canyon of Arizona before the turn of the 20th century. The journey was long and difficult due to the rugged and remote location.


Even when the railroad reached Williams, Arizona, it was still a long 60 miles via stagecoach or horseback. The Santa Fe Railroad knew that the canyon would be a major attraction to get tourists to ride their train west, so building the spur from Williams to the Grand Canyon became a high priority.

The Railroad Comes to the Grand Canyon

The Santa Fe Railroad eventually reached the Grand Canyon in 1901 establishing the Grand Canyon and the surrounding area as a major tourist destination. The beautiful El Tovar Hotel was built by the railroad to allow the tourists to stay in style during their visit.

One of the first to arrive by train was 26-year-old Ellsworth Kolb. Soon his little brother, 21-year-old Emery joined him. Emery had with him a guitar, a camera, and a mouth organ. He entertained fellow passengers with his singing and guitar playing on the long ride from their family home in Pittsburgh, Pennsylvania.

By 1902, they were full-time residents of the Grand Canyon and spent their days trekking, exploring, and documenting everything with photographs. In the ensuing years, the Kolb Brothers basically invented tourism photography, became the first independent filmmakers, produced the first reality show, and to some degree, invented the selfie.

Ellsworth and Emery Kolb bought a photography studio in Williams, Arizona for $425; Emery operated it for a year, mainly photographing saloon girls. When they understood the new demand for tourist photographs while people visited the canyon, they moved the studio there. There they established a thriving business photographing tourists as they descended the canyon on donkeys.

For the first few years, as soon as the tourists passed the camera, they ran four miles down Bright Angel Trail to the closest water supply to develop the film and make prints. They then hiked back up the trail to sell the photographs to the tourists as they finished their day’s expedition.

By 1904, they had built a studio that was perched precariously to the side of the canyon at the head of Bright Angel Trail. There, they continued the tourist photographs and also sold their incredible views of the Grand Canyon, many of them featuring the brothers doing amazing athletic feats from beautiful places in the canyon. 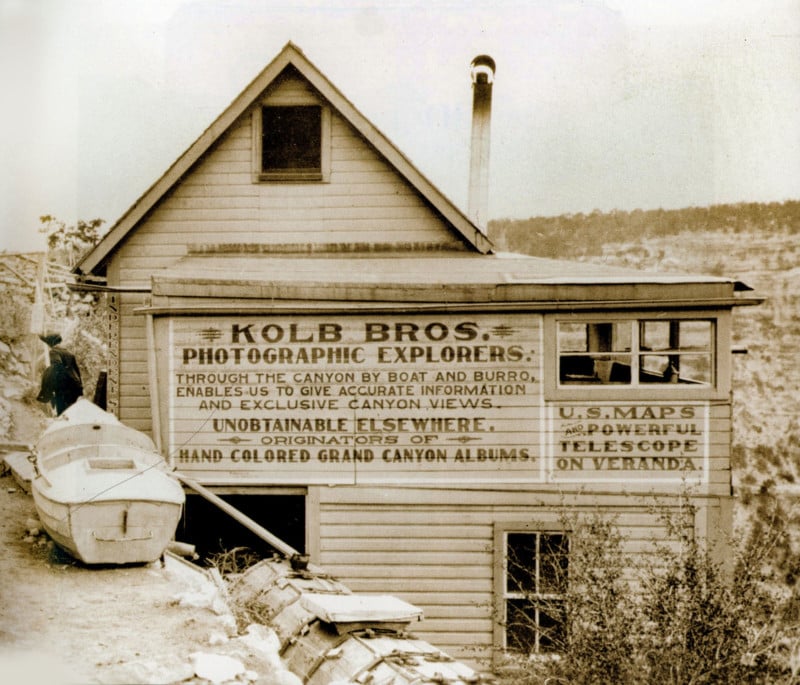 The Federal Government, through the Park Service, had a hands-off policy and pretty much let the railroads do whatever they chose. This even included strategies like building structures that intentionally blocked the view of the Kolb Studio from the train station.

The relentless promotion of the Grand Canyon through prints, postcards, and traveling lectures by Emery Kolb helped establish The Grand Canyon as the major tourist attraction that it is today. As highways and automobiles became more common the railroad lost clout and The Fred Harvey Company went out of business. The arc of history leans toward justice but is not always straight or fast.

Eventually, the National Park Service began to establish rules that allowed more favorable conditions for businesses to operate on park grounds. This new competitive edge provided more goods and services available to the increasing number of people who visited the Grand Canyon.

With the invention of the motion picture camera, the Kolbs sensed an exciting new calling. With much effort and many letters, they became the owners of one of the first movie cameras in private hands, a Pathe.

Even though they had no movie-making experience and even less river rafting experience, they set out to float down the Green River and the Colorado River through the Grand Canyon and make a movie about the trip. The fact that only a handful of people had successfully made the trip and many more had died trying did not deter them. 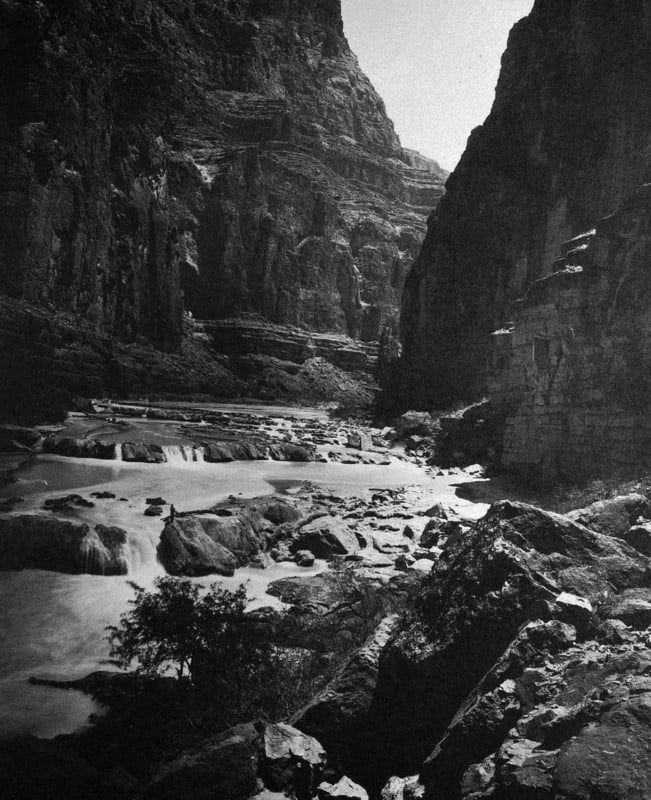 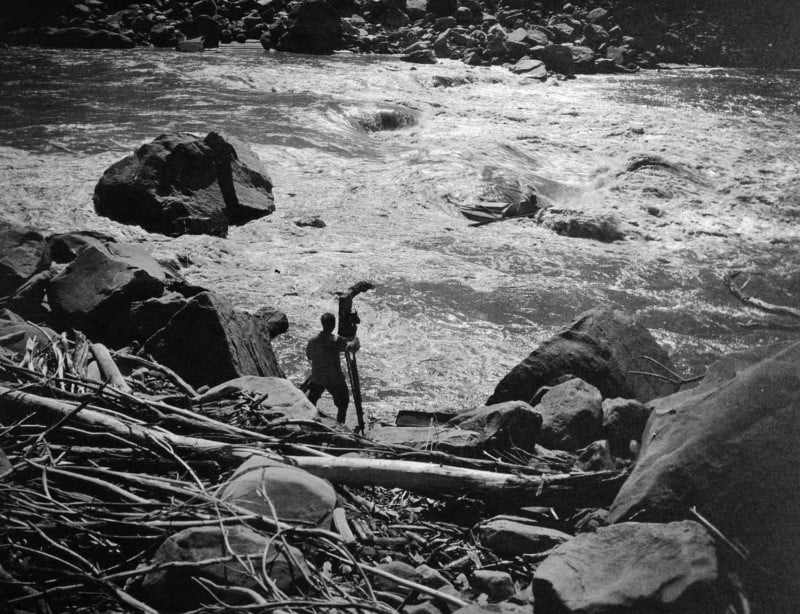 They launched their boat from Green River, Wyoming in September 1911. The trip was as dangerous and harrowing as one might expect in their untested wooden boats before the days of inflatable rubber rafts and experienced guides. They arrived in Needles, California on January 18, 1912. They thus became just the eighth expedition to successfully run the rapids of the Grand Canyon. The movie they made would become the longest-running documentary in film history. The Kolb Brothers built a theater that connected to their Grand Canyon Studio, showing the film multiple times a day to amazed tourists until Emery’s death in 1976.

At first, he would introduce the film and then run up the stairs to start the projector and then run back down to narrate the film which included many stories of near-death experiences. The narration was later recorded so it could be shown in his absence.

Ellsworth and Emery had some general disagreements based largely on their different personalities. Ellsworth was an easy-going daredevil and Emery was more cautious and worrisome. So, with the flip of a coin, they decided that one of them would stay at the Grand Canyon and one would move on.

It is not obvious who won the coin flip, but Emery got the Grand Canyon Studio and Ellsworth moved to Los Angeles. There Ellsworth went on to make documentary movies, becoming the first person to run and photograph the Green, Colorado, Grand, and Gunnison Rivers.

Like so many wives of famous or pioneer photographers, Emery’s wife, Blanche, ran the studio and kept it afloat, raising their family while Emery traveled and photographed much of the West.

Emery also made many lecture tours, showing pictures of the Grand Canyon, and other natural sites, and telling great stories of their extraordinary lives.

No visit to the Grand Canyon would be complete without seeing the carefully preserved Kolb Brother’s Studio and learning about the adventures and daring of these two pioneer photographers and filmmakers.