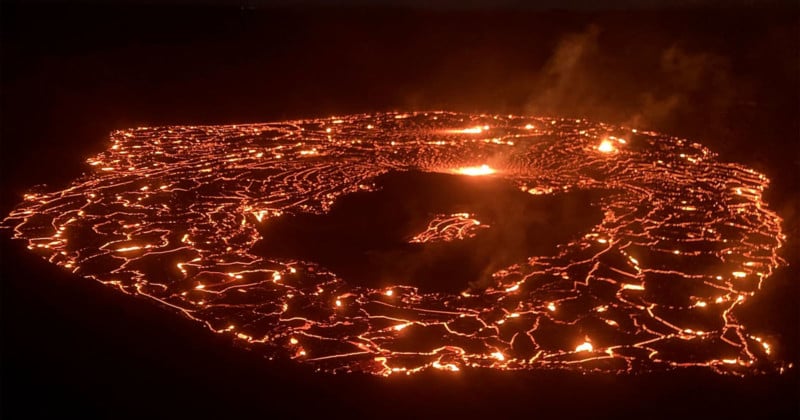 The USGS Hawaiian Volcano Observatory moved the alert level for Kīlauea up from orange to red Friday morning as the organization examines the eruption and any associated hazards. That said, the summit lies within Hawaii Volcanoes National Park and not immediately close to residential areas, meaning there is no indication that the eruption will move out of the summit area at this time.

Kīlauea is quite close to another volcano — Mauna Loa. However, the release from the USGS says that volcano has not been affected by the neighboring eruption. The Mouna Loa Trail and backcountry are closed from the top of Mauna Loa Road because of the eruption, though, according to the National Park Service. Mauna Loa remains on a yellow alert level.

Hawai‘i went from having 2 erupting volcanoes to none. But the volcanoes are still active & will erupt again. This January, #HVO partners with @UHHilo, @Volcanoes_NPS & @CivilDefenseHI for talks & walks to help maintain volcano awareness. #VolcanoWatch: https://t.co/CYyIVRYkWf pic.twitter.com/Fb5QquiYER

A new vent opened in the central-eastern part of the crater at 5:45 PM HST and can be seen in this photo. pic.twitter.com/wxMSjtwUpm

For two weeks in November and December 2022, both volcanos were active at the same time. They stopped around the same time, as well. While that did not get close enough to residential areas to post a threat, it did reach within 1.7 miles of a nearby highway, according to the USGS. And in 2018, Kīlauea, which is particularly active, destroyed more than 700 residences, NPR reported.

The concern, the USGS notes, lies not with the lava spewing that thoughts of an eruption might conjure, but rather with the volcanic gas emissions. The volcanic gas, made up largely of water vapor, carbon dioxide, and sulfur dioxide, is released continuously throughout the eruption, according to the USGS. These gases can then move downwind.

“As SO2 [sulfur dioxide] is released from the summit, it will react in the atmosphere to create the visible haze known as vog (volcanic smog) that has been observed downwind of Kīlauea,” the USGS said. “Vog creates the potential for airborne health hazards to residents and visitors, damages agricultural crops and other plants, and affects livestock.”

The organization added that affects like Pele’s hair, which are thin glass fibers that can be carried on the wind, and similar airborne volcanic particles. These can cause skin and eye irritation.

Those living near the area or planning to visit should check the USGS website for continuing information on any possible hazards or changes to the situation.