The Gemini Observatory on Hawaii’s Mauna Kea dormant volcano has a cloud camera that’s used to monitor sky conditions. But during the ongoing eruption of the Kīlauea volcano, the camera has also been capturing the eruptions dramatic and eerie glow through clouds. Above is a 48-second time-lapse of the glow in the night between May 21st and 22nd.

“During the sequence, multiple fissures expelled lava in the area in and around Leilani Estates in the Puna district of the Big Island of Hawai‘i,” the Gemini Observatory writes. “The lava also flowed into the ocean during the period of the video.”

The camera is a DSLR that has had its infrared filter removed, paired with a wide-angle lens. The removal of the filter “causes the volcanic glow to take on a white/blue hue rather than the familiar red color of the lava,” Gemini says.

The observatory also took 100 photos used for the timelapse spanning about 1 hour of time and stacked them to create this photo showing star trails and the bright glow of the volcano below: 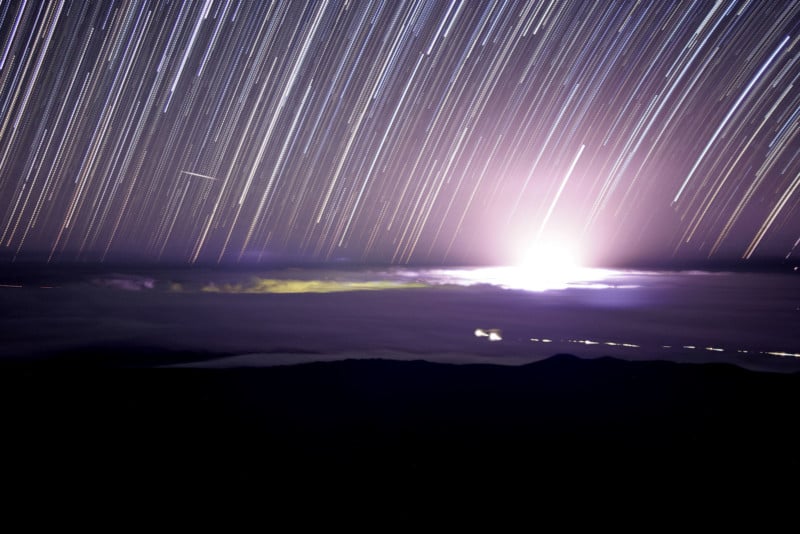 “A bright meteor and the greenish glow of the town of Hilo can be seen left of center,” Gemini says.

The Leica M7 Has Been Discontinued

The Story of How Photoshop Was First ‘Barneyscan XP’