Nathan Eidse is TSN’s on-ice cameraman in Halifax who normally stays out of the spotlight thanks to his fully white outfit. But despite trying to blend in, Eidse has become a crowd favorite.

As reported by The Toronto Star, if Eidse does his job right, he’s not supposed to be noticed. But because he’s so adept at his job, he’s garnered some level of fame.

In a recent appearance at the world junior men’s hockey championship in Halifax’s Scotiabank Centre, Eidse — who is a former goalie himself — weaves in and out of the fray to provide TSN with unique angles while staying out of the way of the competitors, a skill that has caught the eye of onlookers who praise him for his expertise — including three fans who dressed up as Eidse to cheer him on.

“Hats off to this guy. He always sneaks through everybody,” Austrian forward Vinzenz Rohrer tells CBC. 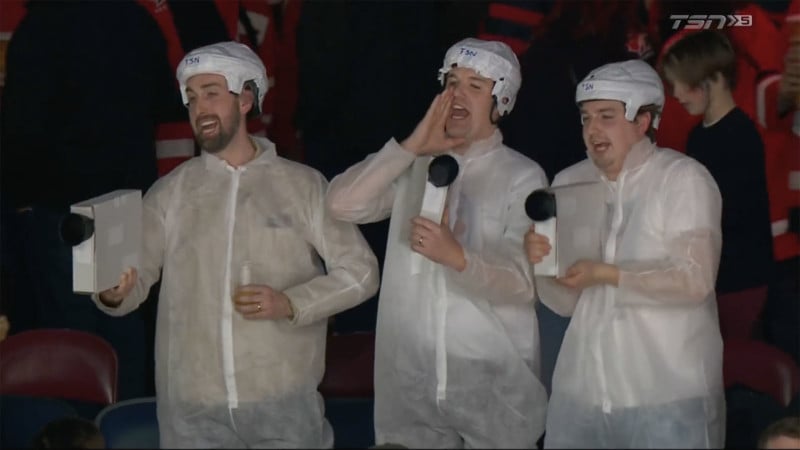 Eidse used to only appear on the ica at the end of games, but TSN started to push the envelope more in 2018, to see what footage could be gathered if he appeared on the ice more regularly during play. To keep him hidden, TSN added to his all-white outfit by covering the white camera cover and white coverings for his skates.

The idea for the camera cover actually came from a legendary player.

“I went out to Winners and bought white pants and a white shirt an hour before our first game,” Eidse says. “Selection was limited, so it didn’t look pretty. But Gretzky was the one that said we need to cover the camera in white.”

Listen I know this Bedard guy is decent…

But can we admire the camera work from the dude on the ice, circling the red hat, while getting Bedard in frame? That shot is unreal. pic.twitter.com/1byTrewwNg

“We’re always looking to do things differently,” Paul Graham, TSN’s vice-president in charge of live-event production, tells The Toronto Star. “I saw it over in Switzerland seven or eight years ago, but it wasn’t very good in terms of the guy who was skating and how they incorporated it. It was cool, but I’m thinking, ‘OK, we can do something better.’”

TSN was given longer and longer leashes at different events, and as Eidse showed his skill at avoiding interfering with the game, organizers continued to give him and TSN more access.

“It’s not lost on me that I have the best seat in the house,” Eidse tells CBC. “It’s pretty neat to be in the middle of everything.”