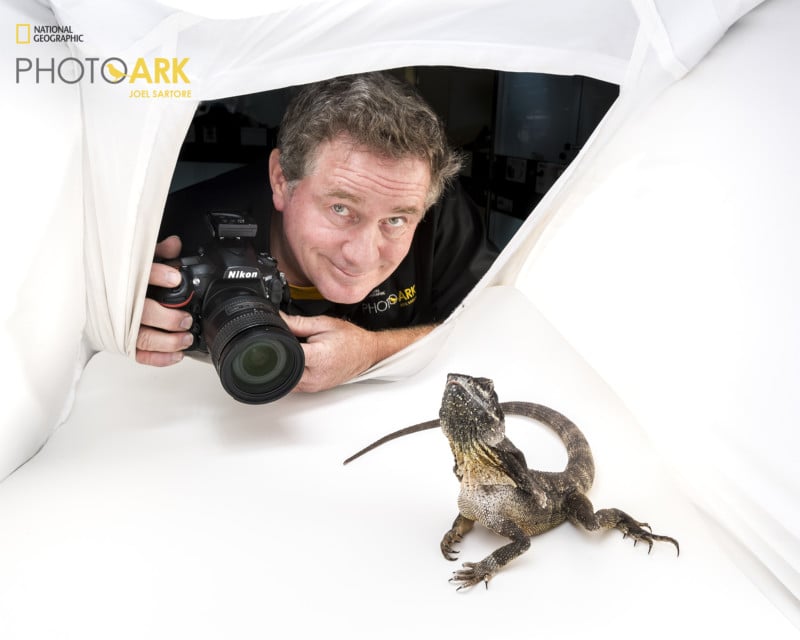 Joel Sartore has been photographing the National Geographic Photo Ark since 2006. He has traveled to zoos, aquariums, and wildlife sanctuaries on every continent except Antarctica to encourage action through education, save wildlife by promoting conservation, and create a photo archive of global animal diversity.


“Our goal is to photograph every species in human care around the world, some 20,000 species, and that will take another 15 years at least––likely the rest of my lifetime,” Sartore, a National Geographic Explorer who travels 8 months of the year, tells PetaPixel. “I’ve photographed 13,500 species [so far]. We now must travel farther and wider to get the remaining species.”

“The most recent milestone species and the 13,000th is the spoon-billed sandpiper,” says Sartore, a photographer, public speaker, author, educator, and conservationist all rolled into one.

This milestone was interestingly reached in the same month as Sartore’s 60th birthday.

The sandpiper is the second bird to serve as a Photo Ark milestone, with the first being the California condor, the 1,000th species to be photographed. The 12,000th, announced in November 2021, was the Arabian cobra.

This spoon-billed sandpiper is critically endangered and could become extinct in 10-20 years. These sparrow-sized birds travel a massive distance after breeding in the Russian Arctic, then migrating south along the Eurasian coast and wintering in Southeast Asia.

Due to human pressures, in particular hunting, habitat loss, and climate change, the population of spoon-billed sandpipers has drastically reduced by 90 percent. Today only about 100 – 150 breeding pairs remain in the wild, says Jonathan Slaght, director of conservation for the Wildlife Conservation Society’s Russian Program.

The keepers at Slimbridge Wetland Center in England got the bird accustomed to walking on a blackboard (to train it for photography) covered with sand to imitate its natural habitat and rewarding it with baby cricket treats.

Understanding and Training the Animal for Photography

When working with wildlife and nature, respecting your subject and surroundings is crucial. The Photo Ark team works for weeks or months in advance with the zoo they hope to visit, learning what species they have that they must bring on board.

“Of those species, we find out from the caretakers at the zoo which animals could participate in the shoot and what the rules of conduct are for the species,” explains Sartore. “All animals photographed for the Photo Ark are put on black and white backgrounds.

“For small animals, we use a cloth shooting tent. For larger animals, paint, fabric, or paper may be used in an off-exhibit space. In an ideal situation, the large animal is habituated to the black-and-white backgrounds well before the shoot day.”

“When working with wildlife and nature in general, respecting your subject and surroundings is crucial,” the photographer says. “Before I even start the shoot, I research my subjects and talk to the keepers to learn what the rules of conduct are for the species, what a respectful distance is, what behavior to avoid, and what their ‘back off’ signal is.

“We try to avoid drama during the Photo Ark shoots, but I remember my first chimpanzee photo session like it was yesterday. After an hour of prepping an off-exhibit space with a heavy white photo background, the chimps destroyed my set at the Sunset Zoo in Manhattan, Kansas. The shoot lasted less than three seconds.”

“Without working with zoos, aquariums, and wildlife sanctuaries, I would likely never have the opportunity to photograph some of the endangered and threatened species featured in the National Geographic Photo Ark,” says the conservationist photographer. “Because certain animals are no longer present in the wild and only exist under human care.

“Plus, it would be nearly impossible for me to photograph any species in the style of the Photo Ark if the animal is in the wild. Just how do you talk a tiger into sitting on a black or white background while in the jungle?

“If something is extremely rare, I move on it as quickly as possible. Nabire, one of the last northern white rhinos left on the planet, at the Dvur Kralove Zoo in the Czech Republic in 2015 was an urgent case, and she has since passed away. Now there are just two left.

“Sadly, I have seen species go extinct since starting the National Geographic Photo Ark,” Sartore says. “The Columbia Basin pygmy rabbit, the chucky madtom, and the Rabbs’ fringe-limbed treefrog have all gone extinct since I photographed them. It saddens me for sure, but I’m not pessimistic. Each species lost inspires me to want to give everything I’ve got to this project and use extinction as a wake-up call. As these species go away, so could we.”

Animals of All Sizes on Studio Backdrops

“People are certainly drawn to charismatic creatures like a mountain gorilla or a lion, but it is the weird and wonderful species that people may have never seen before that I like to showcase to the world,” says Sartore. I try to make all creatures great and small equal [in size] on the black and white backgrounds I photograph them on.

“My goal is to make a mouse look just as large and important as an elephant––giving all species an equal voice. It’s a sight to see when someone notices the beauty in a beetle, an animal people may often dismiss. In my images for the Photo Ark, I hope viewers will look deeply into these animals’ eyes and see they are important and worthy of protection.

“I’ve been a National Geographic photographer for more than 30 years. I photographed the first 17 years out in the wild doing conservation stories on wolves, grizzly bears, and koalas. Can I say that moved the needle enough to stop the extinction crisis? No, no, it did not.

“So, I just figured maybe very simple portraits lit well so you can see the beauty and the color, looking animals directly in the eye with no distractions, would be the way to do it.”

Sartore has visited more than 50 countries and worked in nearly 700 zoos, aquariums, and animal rescue centers worldwide to create the Photo Ark. Most have heard of the Ark and want in on it, so they’re very gracious to let the conservationist come and photograph their animals. They know by now that this is a free service, and they can show each facility and its animals to a new and global audience.

At a time when so many people live in areas without access to wild animals, zoos keep the public engaged in the natural world while also funding habitat restoration and critical breeding programs.

“It’s [also] exciting to collaborate with USPS to bring attention to these endangered species. Photography has the power to show people what is at stake, inspire them to care, and motivate them to take action. It can expose environmental problems as nothing else can and give a voice to the voiceless––especially the smaller or underappreciated species, which may only have this one opportunity to have their stories told to a global audience.

“For some, this can mean the difference between survival and extinction. When the National Geographic Photo Ark covered the Florida grasshopper sparrow for an Audubon Magazine cover story, it got so much attention that the US Government went from spending $20-30,000 per year to document its demise to $1.2 million to begin a captive breeding program.

“That breeding program is a success today, and so there’s real hope for the sparrow, thanks to the hard work of the researchers and breeding centers such as White Oak Conservation Center in Yulee, Florida.

“I hope this USPS stamp collection can bring awareness to these species that need our protection now and inspire curiosity in the people that see them and, ultimately, drive action.

“I got the idea for the Photo Ark when my wife was battling breast cancer in 2006,” remembers Sartore. “She’s healthy and fine today, but I stayed home for a year to care for her and our three kids. Once Kathy recovered, I decided to focus on one big project, something to reach a public with a decreasing attention span and try to move the conservation needle.

“And so, I started going to the Lincoln Children’s Zoo, a mile from my house in Lincoln, Nebraska, to take photos. I asked the zoo staff if they had a small animal that would hold fairly still, so they brought out a naked mole rat and put it on a white cutting board from their kitchen.

“He didn’t hold still very well, but I was intrigued by the fact that these animals live underground in the wild, yet how well I could see his face against the clean white background. It helped me appreciate the animal in a whole new way. That’s how Photo Ark started.

“My parents loved nature and taught me to appreciate it as well, from as early as I can remember. My interest in photography started by taking a few pictures in high school, then I discovered a darkroom in a dormitory in college. I shot a bit for my local newspaper and my college paper, got an internship and staff job at the Wichita Eagle in Kansas, and eventually ended up at National Geographic.”

Sartore’s first couple of assignments for National Geographic was the first real nature photography he did. The assignments he received opened his eyes. The environment was in such terrible shape, yet people just ignored it, pretending it was “normal” to see spilled oil and tar in oceans or medical waste lying around the beach. Those first few assignments made him realize that the amount of work needed would last his “lifetime and beyond.”

Sartore has a few words of advice (based on his experiences) for those who want to become a National Geographic photographer.

Sartore’s first camera was a Nikon FM2, and he paid extra to get the black body. When paying extra for your first camera, you must be passionate about what you are doing.

When we asked him about his gear, he referred us to the list as there were over 40 items on it, including a Nikon D850 and a Nikon Z7.

The National Geographic Society fully funds the Photo Ark. As a global nonprofit, the Society funds individuals, called National Geographic Explorers, like Sartore, who are illuminating and protecting the wonder of our world. These Explorers represent storytellers, scientists, conservationists, technologists, and other changemakers worldwide.

Sartore, a Nikon Ambassador whose motto is “There is no better time to act than now,” wishes he had started 20 years ago. The photographer turned 60 years old this past July. He initially set the Photo Ark goal in 2006 at 15,000 species but has now increased it to 20,000 to be completed over the next 15 years.

“If I am unable to complete the Photo Ark, my oldest son Cole will take it on,” he says with a sigh of relief. “He travels with me on most foreign shoots.”