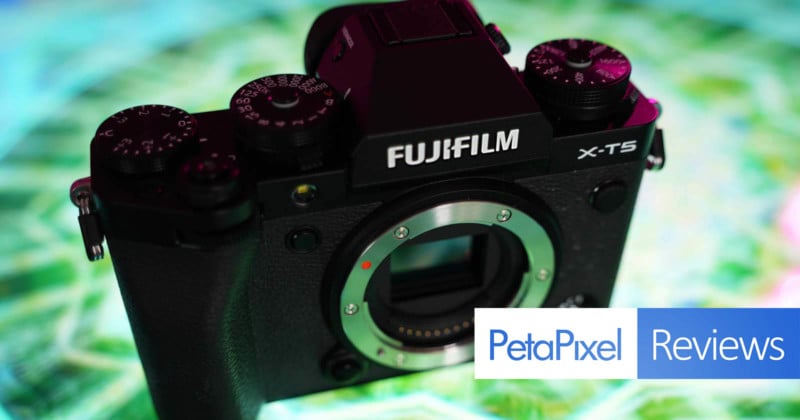 In my brief first look at the X-T5 launch event, I talked about the new smaller size of the Fujifilm X-T5 and its image quality. Fujifilm fans have a lot to love in the X-T5, and it’s a big enough upgrade for customers of the X-T4 to consider moving up to the X-T5.


Author’s Note: In addition to my thoughts below, my video above goes into much more detail about the X-T5 and includes sample images and autofocus testing. I also provide thoughts about upgrading to or starting with the X-T5.

Fuji’s camera and lens design are legendary, and the results are often spectacular. The X-T5 is no exception. Cram the outstanding Fujifilm image quality and film simulations into a body barely larger than the original X-T1; this is a slam dunk for many users.

I genuinely love shooting with the X-T5. I grew up in the film-camera era and shot cameras with analog dials for decades. The controls on the X-T5 (and the X100 models I used to own) are a joy to use.

Medium-format photography is often cited as a more thoughtful shooting experience, which is the case with the X-Tl. I like spending time composing a shot, dialing in the settings, and taking manual control of my shooting experience.

In the hands of a street photographer, the X-T5 is compact and unassuming enough to go virtually unnoticed. The manual control dials allow for quick settings changes while also helping a photographer be more thoughtful while shooting. There are many times when I am using a modern full-frame digital camera, and I yearn for the controls on the X-T5. Scrolling through settings with a finger and thumb is more efficient but feels very mechanical. 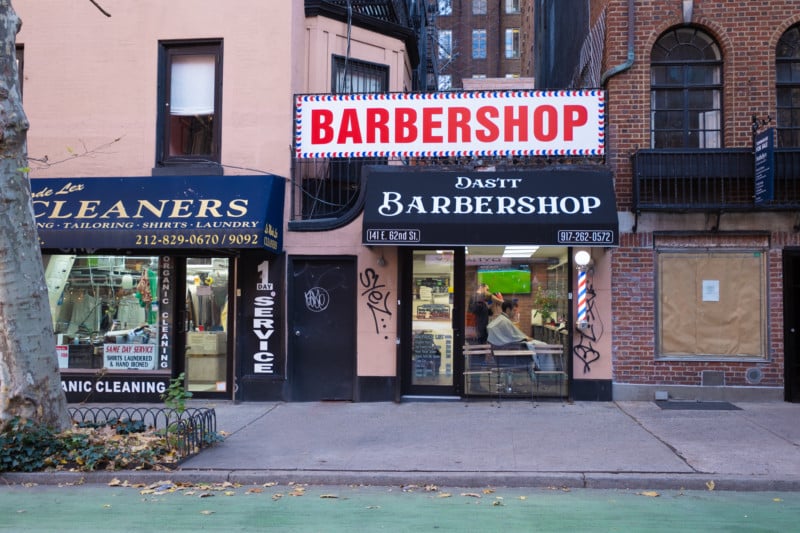 The camera features improved autofocus and a wide range of video modes.

In the APS-C mirrorless space, the Fujifilm X-T5 produces the best image quality by far, so it would seem that the X-T5 is a must-have. During my first look, I was excited about the camera. In real-world shooting, the camera was primarily a disappointment due to the sub-par autofocus.

Unfortunately, there are several areas where the X-T5 falls short of competitors and expectations for a brand-new camera with the most advanced features.

The autofocus, which I’ll get into in-depth, is particularly sub-par compared to any other system on the market. In an era where cameras are adding AI processors to their cameras to get faster and more accurate focus, the X-T5 feels like it’s falling behind in a critical race.

Fujifilm has managed to eek every bit of resolution and image quality out of its APS-C cameras. As a reviewer, I’ve always been impressed with the images from Fuji’s camera. I owned the first three X100 camera models, and some of my favorite travel photos were taken on those cameras.

Fujifilm did it a bit better no matter how much other companies could do with the images from their APS-C cameras.

The same is true of the X-T5. For an APS-C camera, the images are superb, and the 40-megapixel sensor in the X-T5 provides excellent detail. The high-resolution sensor comes with a tradeoff, though. The more pixels on a sensor, the more noise is present at a higher ISO.

Shooting side-by-side with the Sony a7R V I was testing for this PetaPixel review and follow-up AF tests, the Sony had much greater detail and much lower noise at comparable ISO, even being a 60MP sensor instead of a 40MP sensor.

They say the Devil is in the details, but in Fuji’s case, the Devil is in the dials. Those beautiful analog dials I love so much also ruined dozens of shots during my month-long testing. Covered in dials and switches, the X-T5 has a lot of control surfaces that can be accidentally bumped and changed.

Almost every time I took the camera out of my bag, the front focus control switch moved from continuous to manual. If it were just that one switch, it wouldn’t be a deal breaker for me, but I missed shots at some point due to changing every dial in my bag.

Another troublesome control is the one that switches the camera from photo to video mode. Like with the focus mode control, this was often moved from photo to video, and I have several out-of-focus two-second-long videos that feature me cursing.

I even managed to turn the dials that have locks accidentally. This is, of course, primarily my fault since Fujifilm equipped these dials with buttons to lock them, but I don’t always remember to lock a dial before I put my camera away. 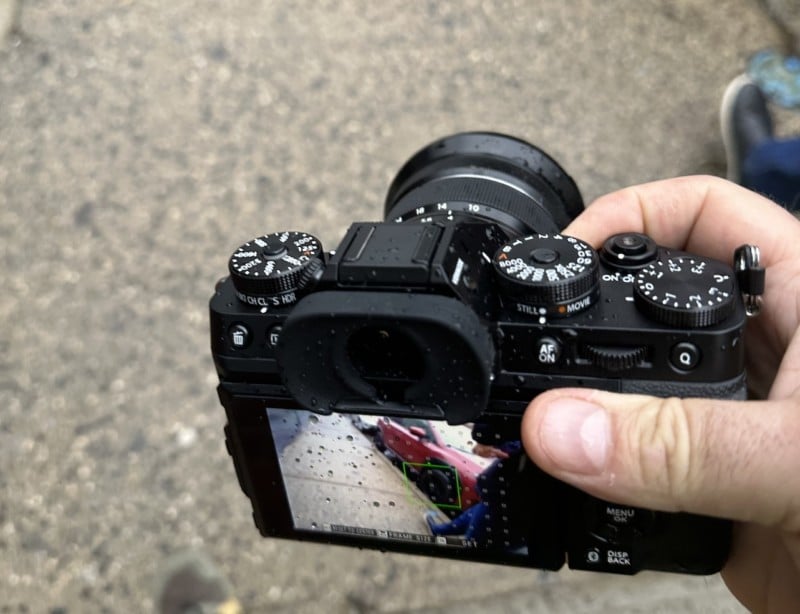 If Fujifilm were my main system, I’d eventually make a mental checklist of things to adjust before shooting, or then again, maybe I wouldn’t.

In our briefing, Fujifilm made it clear that the X-T5 is a photo-first camera, but it inherits many of the X-H2 video functionality. Here again, the design choices hamper the usefulness of the camera. The screen does not flip out, which is understandable on a photo–first camera, but it significantly reduces the viability of the camera for single-person filming.

Worse, while the camera has numerous indicators on the back to signal that it’s recording, there are none on the front of the camera. The eye detection in video capture is excellent, but there’s no way to verify you’re in focus and no way even to see if you’re recording.

In my video above, I run through all of the AF modes so you can see the hit rate of the X-T5.

The Fujifilm X-T5 adds several subject-recognition features to its existing (and theoretically improved) human eye detection. In my testing, I found these new subject detection modes are not much better than standard tracking modes. Animal and bird detection rarely focus on the eye of the subject, necessitating shooting at a small f/-stop to get an animal’s eye in focus. The last thing a wildlife photographer wants to do is stop down to shoot moving animals.

Human eye AF was disappointingly hit-or-miss. In all of my tests, the camera would fail to lock onto eyes even with subjects that were still and where both eyes were visible. In one series of shots in the video, the system jumped on and off my son’s eye without him even moving.

This might be difficult to see in the web-resolution images below, but there is a clear difference in focus between the two at actual size. 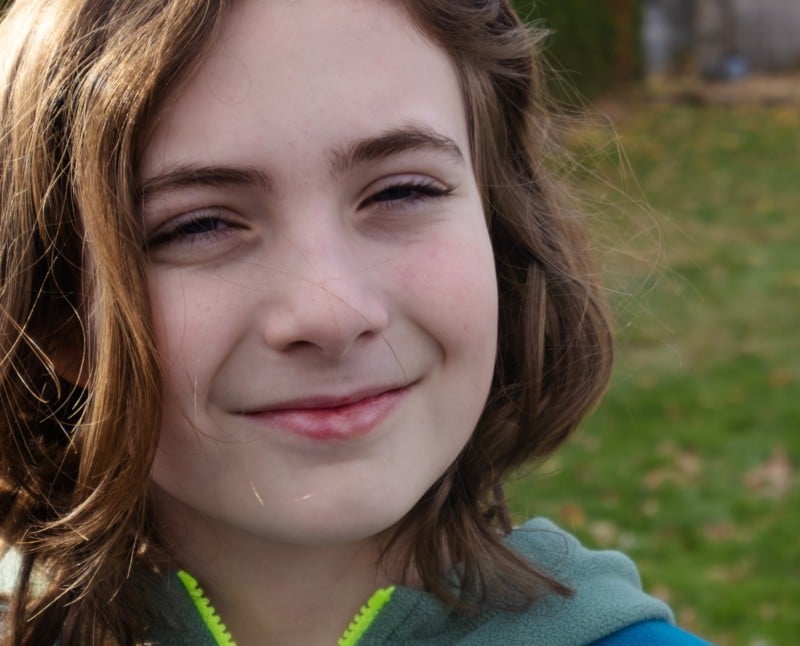 Surprisingly the video eye-detect AF is excellent. I shot the review video with the X-T5 wide open, and there’s not a moment of footage where it lost my eye, making the poor photographic AF perplexing.

Even more perplexing, the X-T5 did very well in conditions that often stump eye-AF systems. Even with one of the subject’s eyes in deep shadow, the camera managed to pick out the other eye with no problem.

Before you write this off as a difference merely in the price points of the systems, my son had a telling comment while testing the camera at the Bronx Zoo. We went to Botswana on safari this year, and his hit rate was much higher than the Fuji, and at the zoo, he said, “I guess I just got used to how good the focus was with the camera in Africa.” That camera was the Sony a7c, which uses the same focus system as the a7 III, introduced in 2018.

In these two images, the camera missed focus. In the eagle the nostril is the focal point, and in the Lemur the nose of the farther lemur is in focus. This camera likes noses. 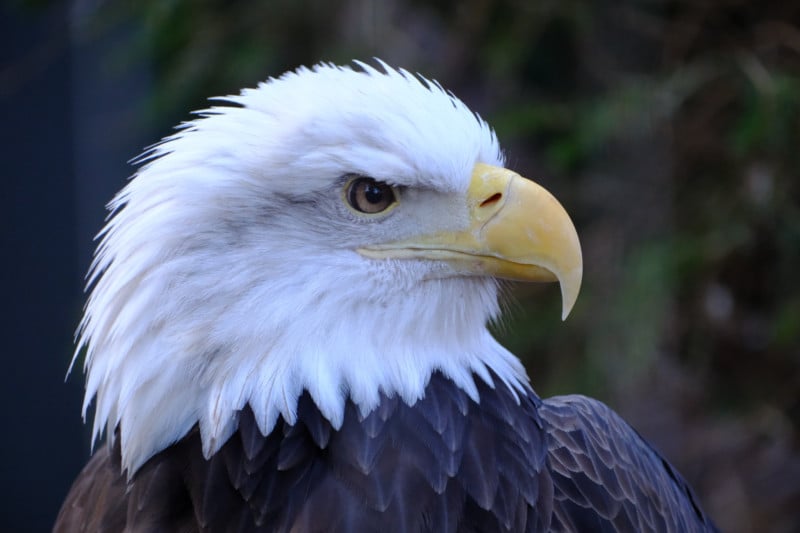 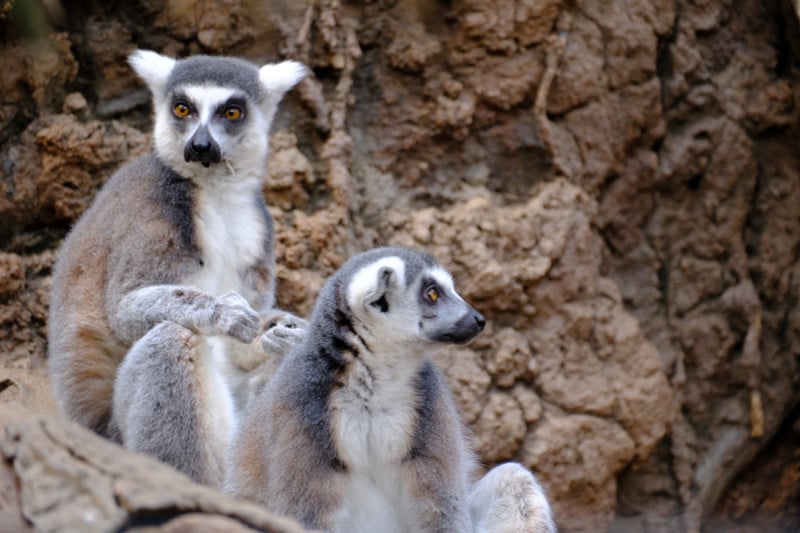 There were some successes with animal recognition during the testing at the zoo. The camera managed to focus on the seals’ eyes, a notoriously tricky task as seals emerged from the water with a shimmering layer of water covering their bodies. There were more in-focus shots of this hard-to-capture animal than most other subjects I tried. 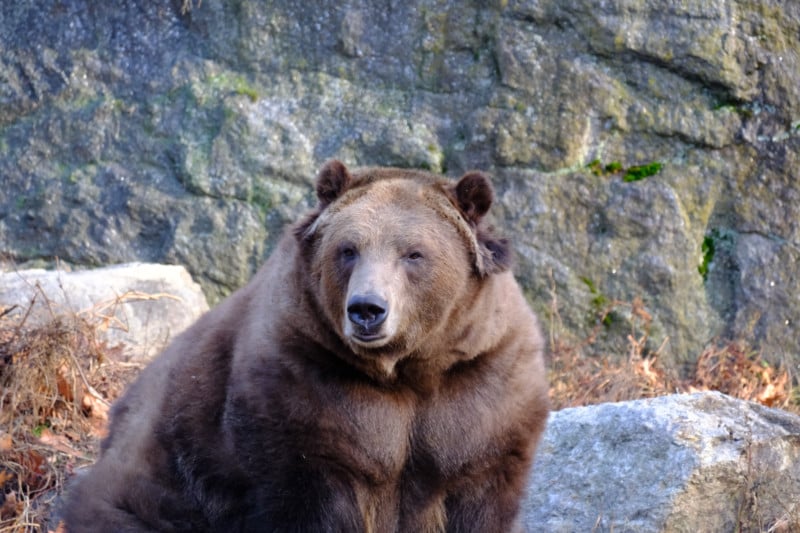 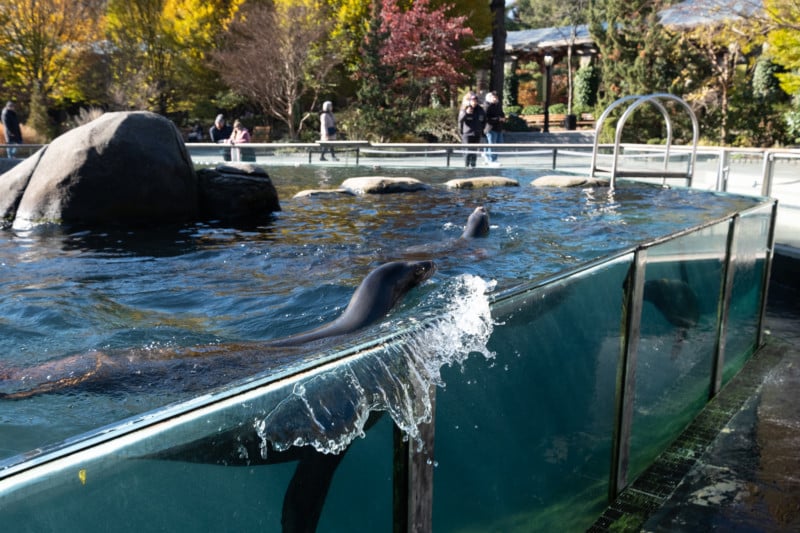 The focus on bears and wild dogs was also likely because most animal AF systems are designed around domestic pets. Bears are just large murder dogs, and their snouts resemble the average canine.

While The X-T5 locked onto bears and wild dogs successfully, it could not lock onto the eye of a red panda, which spent the whole time we photographed it sitting perfectly still.

The Fujifilm camera also had trouble finding the eye of my cats. Like the panda, cats are notoriously opposed to moving, and in many shots, the X-T5 locked onto my cat’s nose instead of its eyes. This also happened with many of the wild dogs’ pictures, and on the red panda. 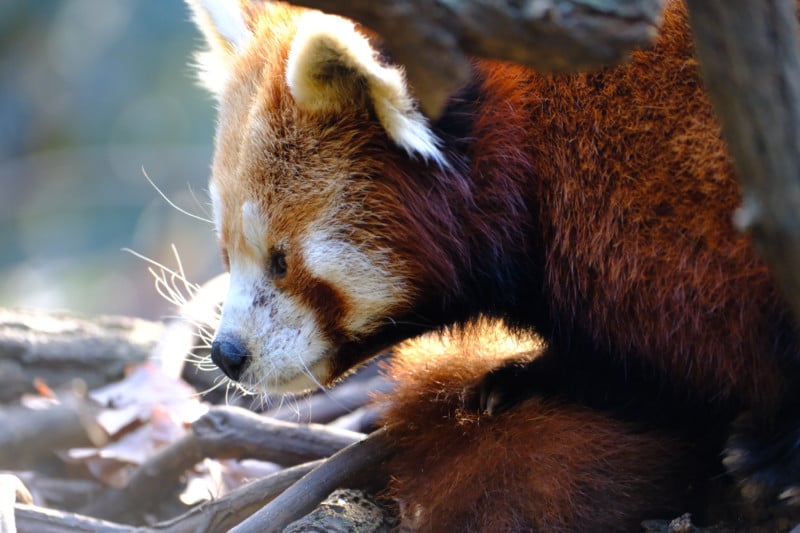 The Fujifilm X-T5 is a surprisingly good video camera, inheriting many of the video capabilities of the X-H2 and X-H2S, just slightly scaled down in record times and some of the high-end codex. There’s no ProRes in the X-T5, while the X-H2S has ProRes internal, ProRes RAW, and BRAW external Recording.

Even missing those codexes, the X-T5 can record 6.2K, oversampled 4K with All-I and Long GOP, and capture in F-Log 2. The X-T5 would be an excellent B-camera for someone shooting with the X-H2S.

I am more impressed with the video capabilities of the Fujifilm X-T5 than I am with the still capabilities, mainly because the video capture offers so many features and produces spectacular footage with very little to no rolling shutter.

If the X-T5 had a flip screen, it would likely become my main studio and in-the-field camera. The size and weight of the X-T5 are perfect for vlogging and gimbal use. Many wide-angle Fujifilm lenses are ideal for vlog-style shootings, and the recording settings are more than enough for my YouTube work.

But without a flip screen, I’d need to use an external HDMI recorder, which would offset the weight savings of using the X-T5. 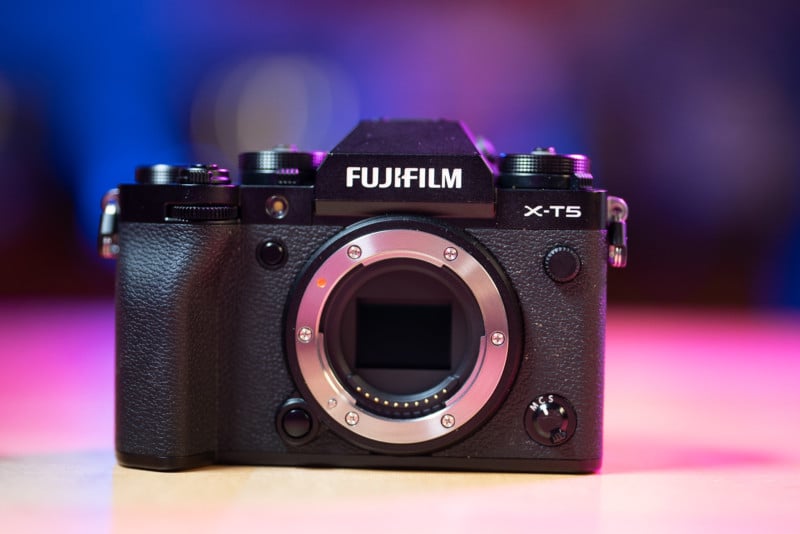 For the sheer quantity and quality of lenses, no other APS-C system compares to Fuji’s lineup. If you’re a photographer or videographer looking for an excellent still photography camera with fantastic video qualities and a vast selection of available lenses, there is no other option.

If you want an APS-C camera for selfie-style videography, a better choice would be the Canon R10 or Sony ZV-E10, both of which have flip-out screens.

Whether you should purchase the Fujifilm X-T5 depends on your style of shooting. If you need lightning-fast autofocus and hyper-accurate autofocus, you should not buy the X-T5.

If you’re looking for a thoughtful camera that forces the photographer to concentrate on images but is also flexible enough to go full-auto and take great shots, the X-T5 is for you.

You should also consider the X-T5 if you want to capture surprisingly high-quality video.

Fujifilm fans, and you know who you are, will love the X-T5 as it improves on the Fujifilm experience enough to be worth the upgrade.

Photographers looking to buy their first camera should consider alternatives before jumping into the Fujifilm ecosystem with the X-T5.