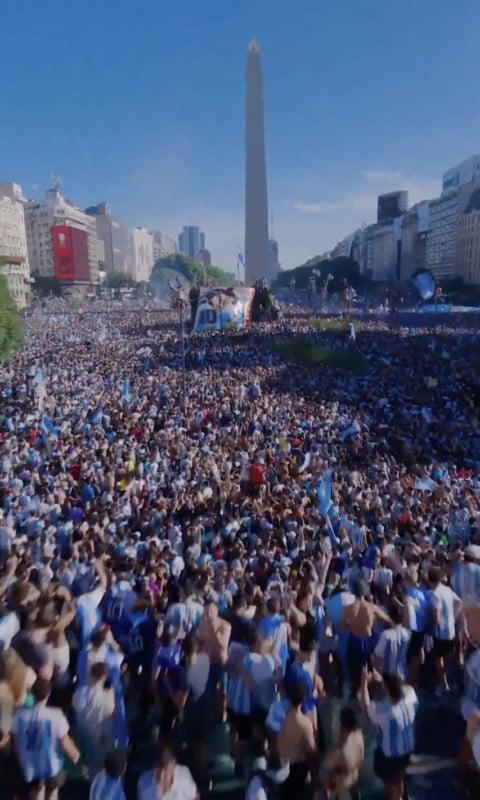 A drone pilot has captured the collective ecstasy of 200,000 Argentinian fans celebrating their team winning the World Cup yesterday.

Ale Petra and Martin Hernandez published the staggering footage that shows a sea of humanity in the Plaza de la Republica in Buenos Aries.

The overjoyed fans are celebrating after their team, led by talisman Lionel Messi, won a thrilling World Cup final on penalties after the game was drawn 3-3 against France.

The drone flies over an enormous banner of Deigo Maradonna, Argentina’s other iconic player who led the country to their last World Cup triumph in 1986.

The camera then reaches the top of the Obelisco, a 68-meter (223 feet) national monument before flying back down the plaza where gleeful fans can be seen for miles.

“This is happiness for everyone, for all these people. Today it was our turn and the joy is ours,” Julio Berdun, a hotel receptionist tells reporters from the Plaza de Mayo square.

Petra is a drone and FPV pilot based in Amsterdam and Buenos Aries. In a recent video, he shared his test experiences with the new iFlight Nazgul Evoque F5 v2 W/ 03 Air Unit putting it through its paces in an industrial complex.

It’s unclear which drone Petra used to shoot the video from Buenos Aries yesterday but he had previously shot a similarly thrilling video of fans celebrating their team reaching the Word Cup final after they had beaten Croatia. But there are significantly more people in the video filmed yesterday.

The AFP news agency also put out drone footage taken above the Plaza de la Republica. But AFP’s footage appears not to be taken from an FPV drone and therefore doesn’t have the dynamic of Petra’s video.

On his Instagram profile, Petra states he has an ANAC drone license from the National Civil Aviation Agency in Brazil and an EASA license issued by the European Union