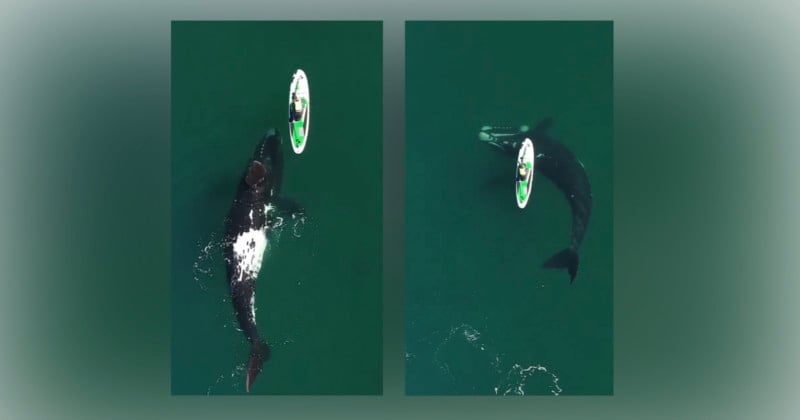 An Argentinian photographer has captured a once-in-a-lifetime drone shot of a whale playfully swimming beneath a stand-up paddle (SUP) board as the rider takes in the view of the magnificent ocean mammal.

Maxi Jonas, a professional photographer for Argentina’s nation press agency Télam, has captured whales on many occasions as part of his interest in wildlife photography. However, as spotted by DroneDJ the video taken by Jonas on September 1 is different, and is one that the photographer calls the “best whale drone video” of his life.

The unique footage, shot over the bay of Puerto Madryn along Argentina’s coast, shows a southern right whale — a species found throughout the Southern Hemisphere that has an average weight of 23,000 kilograms (50,706 pounds) — venturing into the bay as Jonas’ drone was overhead. Coincidentally, a stand-up paddleboard (SUP) rider was nearby and the whale felt curious enough to approach, giving Jonas the opportunity to capture the unlikely experience.

In an interview with Télam, Jonas said that “in addition to the friendly behavior of the whales, there is a provincial law that prohibits the contact of people with the animals. But in this case, it was the whale that approached the table to play as if it were a pet.”

Jonas’ footage garnered significant attention on social media after he posted it on his Twitter account, and Analía Giorgetti — the woman who was on the padde board — came across it and got in touch with Jonas. She told him that “it was only the second time that she got on a board” and the main reason for getting out in the water on September 1 was because it was her birthday.

Giorgetti says she remained calm during the encounter and simply watched the large whale swim underneath, although at one point she felt that it touched her and took out her cellphone to record it as it passed by. At that point, she also realized that there was a drone above them both.

“The photographer captured the moment in a magical way,” she recalls.

Although this friendly — and highly improbable — experience between the SUP boarder and a southern right whale was coincidentally captured on a drone for the world to see, Giorgetti urges people against seeking similar encounters.

“I would not like the bay to fill with people going out to look for whales,” she explains. “No one should disturb them.”

More of Jonas’ work can be found on his Instagram and the full interview can be read on Télam website.