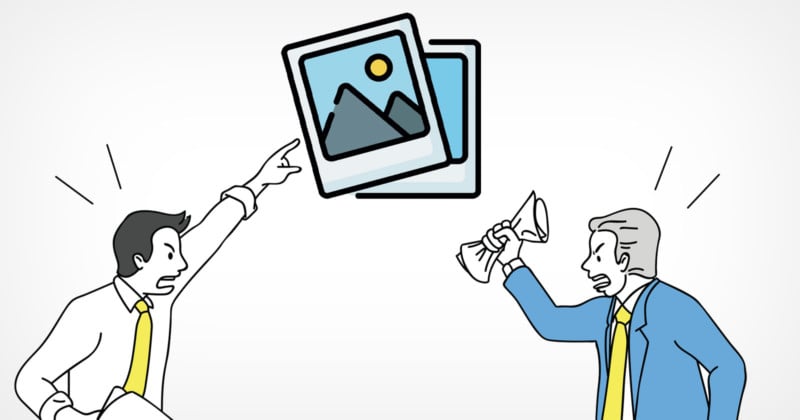 Artificial intelligence-powered image generators have exploded into the mainstream. Thanks to support from major stock sites, they are also an approachable route to making money. But as is almost always the case, when money gets involved, the situation quickly becomes far more complicated.

But the support for AI-generated imagery may be outpacing the established set of rules that regulate how artists interact with each other and as a result, disagreements and accusations of theft are bubbling to the surface as they grapple over what about these AI-generated images they actually own.

A Tale of Two AI Artists

Last September, Brian Penny and Kris Kashtanova met online through a Facebook group that was established to discuss the growing generative AI landscape. Penny, who started working with AI image generators soon after they became available, shared his work and some tips with the group that were based on his experience in this emerging field.

Kashtanova, looking to help other artists get into generative AI, worked with Penny to create content she would later turn into videos on YouTube. Both Kashtanova and Penny were extremely active on the Facebook group and both eventually joined an Adobe-hosted Discord server that discussed the topic of generative AI that could be listed on stock sites, namely Adobe Stock.

After publishing a few videos, Kashtanova’s tips caught the eye of Adobe who began working directly with the artist, with the goal of making more videos and content to help others submit more content for stock. Through this process, Kashtanova learned what Adobe was looking for, how they would market certain images, and that the company intended to feature certain artists and images seasonally. All of this led up to the official support for AI-generated artwork on Adobe Stock that the company announced on December 5.

At this point — as is often the case with disagreements — the two stories get a bit murky. Kashtanova says she was just trying to help Penny make his Adobe Stock library more appealing, while Penny believes she was actively trying to get his account to be less competitive by asking him to remove certain content. Specifically, Penny’s library apparently has too much content that looks too close to Pixar characters, an issue Adobe wanted to skirt around.

Whatever the case, this served as the breaking point between Kashtanova, Adobe, and Penny, and Penny lashed out. Penny tells PetaPixel that he is upset that Kashtanova is the one who ended up with the direct relationship with Adobe, and when he attempted to point out that it was actually his idea to Adobe Stock’s Discord, his posts were deleted and he was eventually banned.

“Brian Penny posted screenshots of private conversations on one of Stock’s public Discord channels, which has led to these posts being removed (as per our guidelines regarding personal privacy),” an Adobe Stock representative tells PetaPixel. “Brian was immediately warned that this practice was not allowed but continued this behavior, and was subsequently suspended from the Discord server.”

Penny shared a long list of screenshots from the AI generative Facebook Group as well as private messages between him and Kashtanova with PetaPixel with the goal of backing up his side of the story.

He claims that he is the progenitor of AI-generated images as a form of stock imagery, taught Kashtanova everything she knows, and because of the tutorial she made based on his knowledge, gained Adobe’s favor. He then claims Adobe used that to create the terms of service to manage the newly announced rules for AI-generated art on Adobe Stock and shut him out, including refusing to feature him prominently which, he says, results in far fewer stock image sales.

“From my perspective, Adobe essentially stole the entire idea of using generative AI as [stock] images from me without giving me any credit,” Penny tells PetaPixel.

“Not only that, but I feel that I inspired every AI artist’s work on Adobe Stock. I am the one who can prove I shared the idea with both the AI art community and directly to Adobe multiple times in the 90 days leading to the creation of the Generative AI terms and conditions.”

Penny claims that not being featured is akin to being “shadow-banned” by Adobe. That term might be too strong to encompass what has happened here, as his account and images are still visible and come up in searches on Adobe Stock. Furthermore, Adobe Stock denies the claim.

“No. Brian Penny’s content and portfolio are not ‘shadow-banned’ nor has he ever been shadow-banned from the Adobe Stock marketplace,” the company says.

In conversations with PetaPixel, Penny claims that Kashtanova stole the exact text prompts he used to create his AI-generated imagery, which are arguably the perfect recipes for making his very specific and highly desirable images. Kashtanova doesn’t deny to PetaPixel that she used the same prompts but stipulates that he shared those text prompts publicly and as such it was not possible for her to steal them since they were freely given.

Regardless, this disagreement does bring up a very important question about AI-generated imagery: What is actually owned by the artist?

There may not be an answer, at least not yet.

Regardless of the outcome of this “he said she said” disagreement, the core of the issue that has been brought up by it is copyright and how that relates to AI-generated imagery. Unfortunately, the advent of this new technology has accelerated far faster than protections for the art have been established.

“The law has to catch up to technology,” Mickey H. Osterreicher, the General Counsel for the National Press Photographers Association (NPPA) tells PetaPixel.

“Copyright law is not prepared and is not set up to protect the artists or the users at this moment in time,” he says. “A lot of it is not going to be determined under copyright statute, but rather, unfortunately, in litigation.”

At its core, copyright law covers original works of authorship that are fixed in a tangible format.

“That includes literary works, which includes text,” Maddrey says. “There is a dividing line though, so I can’t copyright the word ‘red’ but if I write an essay about the color red, that is copyrightable because that is an original work of authorship.”

“You can’t necessarily copyright an idea,” Osterreicher adds. “There has to be something that has a tangible form that can be perceived by someone else. That is the way the law reads.”

Maddrey says that just like with NFTs in this past year, there are so many open questions about copyright law that simply don’t have answers.

“Should AI-generated images be subject to copyright protection? Here we have a little more guidance,” he says. “A number of years ago there was the case of the monkey that took a photograph and the answer was no, it could not be copyrighted, because it has to be a human author. Just in the last week or two, the copyright office rescinded a copyright registration they approved because it was an AI-based work.”

That AI-based work he is referring to was a comic that was, coincidently, created by Kris Kashtanova. Kashtanova was originally granted a copyright for the work in September and was the first example of the copyright office recognizing an AI-generated work as copyrightable. But in October, the copyright office returned the registration to pending and asked that she provide details of the process to show that there was substantial human involvement in its creation. That case is still ongoing.

I am excited: We are working with @icreatelife to respond to the Copyright Office about "Zarya of the Dawn." We argue that artists using AI tools should be recognized as authors and allowed to copyright their work.

“That is the current metric that the copyright office uses whether that human author was involved such that copyright applies,” Maddrey says.

“If the copyright office is not convinced that substantial human involvement was involved in the creation, they will not grant a certificate to something that was made solely with AI at this point. I don’t think this is likely to change any time soon. There already is an AI caucus in congress that is starting to look at some of these issues, but the copyright office itself is going to continue to ask questions if they believe that a work is, for whatever reason, not generated by a human author.”

So what does an artist who uses AI to generate images own? Right now, copyright law makes no determinations one way or the other. Adobe Stock won’t either.

“Adobe takes the same approach with generative AI content as with other types of content. Since contributors are submitting generative AI content developed using a range of third-party tools, Adobe is not able to weigh in on the ownership rights involved in the content,” an Adobe Stock representative says.

“However, when submitting content, contributors represent that they either own the content or have the necessary rights to allow Adobe Stock to use the content as described in the Adobe Stock Contributor terms (e.g., commercial use in all media) and that the content does not infringe any third-party rights.”

Basically, Adobe Stock isn’t prepared to make a determination on ownership any more than the copyright office is.

“I think that someone making a copyright infringement claim over the text prompt or a search string that is put into an AI image generator might have trouble at this moment in time claiming that piece of it is subject to copyright protection. It would depend entirely on how specific and how original those text prompts were,” Maddrey says.

“So much of what we see are not legal questions right now, but ethical questions. Is an image clearly someone’s style? If so, that’s not a violation of copyright law,” Maddrey explains. “You can’t copyright a brush stroke element, so just saying that something is done ‘in my style’ is not a legal argument. It’s an ethical one.”

As Maddrey pointed out, most of these rules won’t be set in stone until someone sues someone else and a court is forced to make a decision.

“Even after litigation, after that first case where a court is going to have to say something, they’re probably going to look at the copyright office and ask for help. Regardless of the outcome, I can’t imagine that it isn’t going to get appealed,” Osterreicher adds.

“That process will take years, whenever it even starts, and there will no doubt be new technologies that will come along that will add to the confusion.”

Don’t think photographers are off the hook here, either. AI is everywhere, and if a camera is set to “Program” and it uses AI to track a subject, don’t believe for a second that a defense lawyer who figures they can win a case won’t call that out as a reason why the photographer doesn’t deserve copyright credit for the image.

“This is something that the copyright office is obviously aware of, but I see nothing in the law or regulations that would allow us to give guidance to creators related to copyright law and AI art. What is clear is that without substantial human involvement, the office won’t grant registrations, or they’ll rescind it as what happened with Kris Kashtanova.”

Coincidently, Both Maddrey and Osterreicher were in Washington D.C. this week to engage with other lawyers and lawmakers about this very issue. The two believe that in the very near future, there will be a need for photographers to include clauses in their commercial contracts that cover the license to use photos to train generative AI.

“I think it’s important to note that very few artists, photographers, or any creators have been paying attention to this such that their licenses or their agreement even conceive of this as an option,” Maddrey says.

Update 12/13: Added a Tweet regarding the AI-generated comic book copyright case and clarified that the case is pending, not fully rescinded.