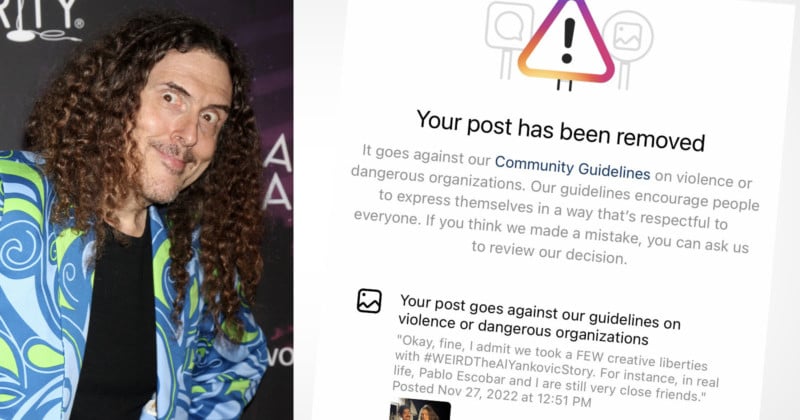 Weird Al took to Twitter to express his bemusement at the photo-sharing app for removing a post that was clearly a joke.

Weird Al tried to post a photo with a Pablo Escobar lookalike with the caption: “Okay, fine, I admit we took a FEW creative liberties with #WEIRDTheAlYankovicStory. For instance, in real life, Pablo Escobar and I are still very close friends.”

The harmless fun was removed by Meta’s Instagram because it was against community guideles “on violence or dangerous organizations.”

“Our guidelines encourage people to express themselves in a way that’s respectful to everyone. If you think we made a mistake, you can ask us to review our decision,” it adds.

A bewildered Weird Al tweeted out a screenshot of Instagram’s decision to his five million followers: “Ha! Okay, Instagram…”

Oh hi Instagram ! I can’t post. I asked for review many times, no reply. You’re tearing me apart ! pic.twitter.com/VBK1p3Ggq2

“I asked for review many times, no reply. You’re tearing me apart!”

Weird Al’s plight to have a photo on Instagram with a fake Pablo Escobar reflects the strange and incoherent world of social media moderation.

“Instagram has been doing odd things lately. A month ago my entire account was disabled, because they apparently thought I was a bot,” writes one user.

However, it’s not just Instagram. Earlier this month, astronomer and astrophotographer Mary McIntyre was locked out of her Twitter account for three months after a video of a meteor she published to the platform was flagged as “intimate content.”

McIntyre’s video was flagged by Twitter’s automated moderation system and she was given only one option: delete the tweet. If she did so, however, it would have meant she agreed with the assertion that the content violated the social media company’s rules.

“It’s just crazy… I don’t really want it on my record that I’ve been sharing pornographic material when I haven’t,” she tells the BBC.