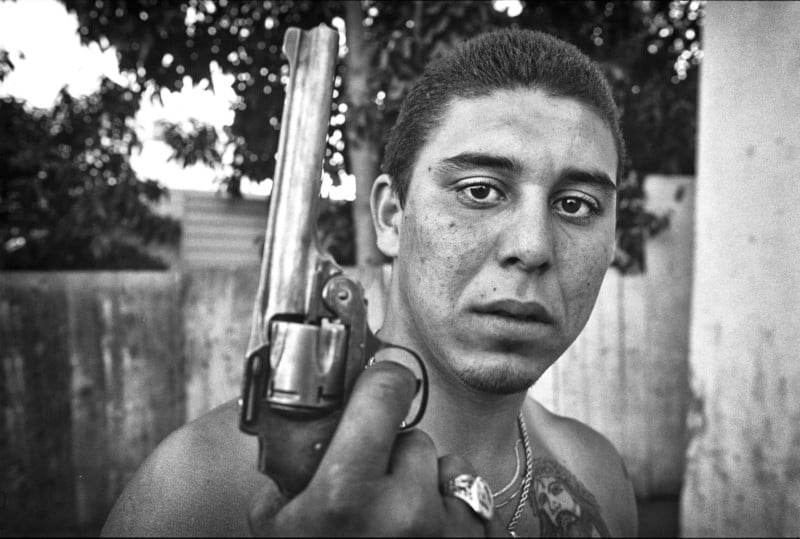 Morton’s groundbreaking black and white photos provide a rare insight into the day-to-day lives of L.A.’s Mexican-American mobsters during the 1970s and 1980s.

He captured the incredible images while on assignment for Rolling Stone magazine. However, Instagram has deemed Morton’s photos unsuitable for the platform despite the photographer having nearly 60,000 followers. Morton has also been the set photographer for iconic movies such as Fight Club, The Big Lebowski, and La Bamba.

According to The Daily Chela, Instagram has given Morton 30 days to file an appeal but it has so far been unresponsive to Morton and has offered few details on why his account has been suspended.

Instagram’s Community Guidelines state that it is “not a place to support or praise terrorism, organized crime, or hate groups.”

However, there is a clause that allows content for “public awareness which would otherwise go against our Community Guidelines.” Morton tells The Daily Chela that he suspects his suspension is due to his photos that document gang culture.

“My images do not promote violence, they actually promote the cultural identity of the city of Los Angeles… I feel my suspension should be lifted,” he says.

To make matters worse, an account using Morton’s photos that is falsely claiming to be him has not been suspended. Meta-owned Instagram appears to have been flagging more content as dangerous recently. Weird Al Yankovic recently fell foul of the same guidelines for posting a photo of him with his “close friend Pablo Escobar.”

Weird Al took to Twitter to express his bemusement at the photo-sharing app for removing a post that was clearly a joke.

“Instagram has been doing odd things lately. A month ago my entire account was disabled because they apparently thought I was a bot,” writes one commenter.

Update 12/7: After publication, an Instagram representative reached out to PetaPixel and confirmed that Morton’s account has now been reactivated.